Search
Melbourne Business School News The story of Brally, a love match made on the Master of Business Analytics

The story of Brally, a love match made on the Master of Business Analytics

Melbourne Business School has a special place in the hearts of Ally Gu and Brian Kang. It's where they met, and where Brian asked Ally to marry him – much to the relief of the couple's former classmates. 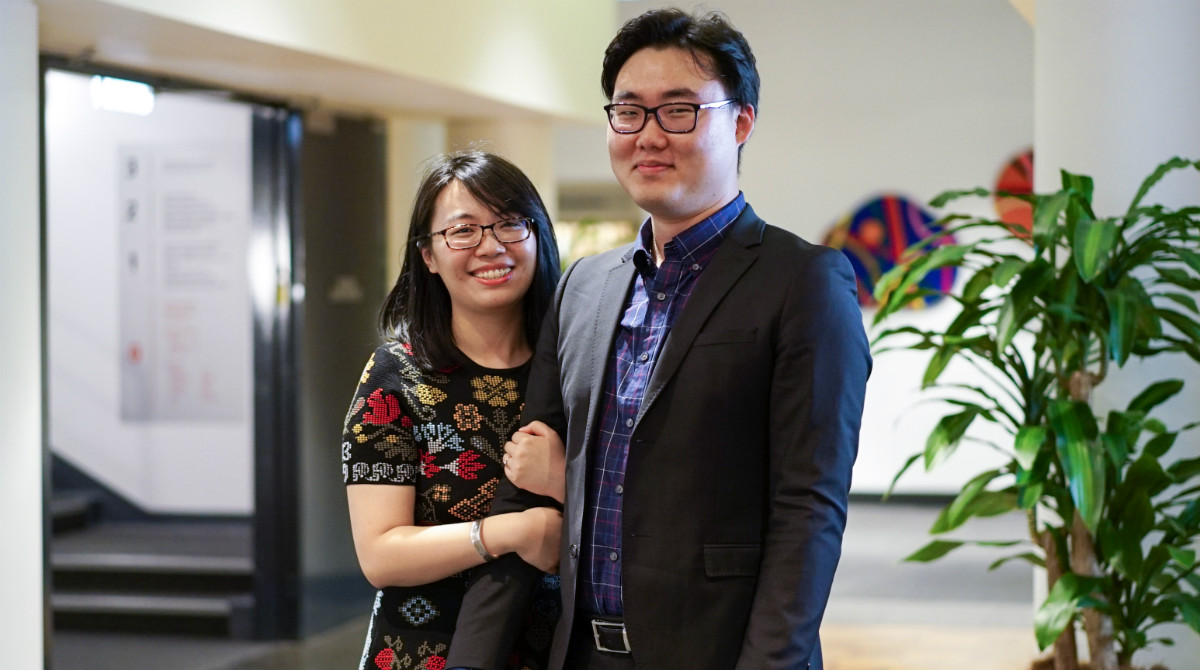 It took Brian three years to bend his knee, produce a sparkling ring and propose to Ally in the School's foyer after first meeting her on the inaugural Master of Business Analytics program in 2015.

"It really was love at first sight," Brian says. "I noticed her at an interview before classes began, but I wasn't sure she was interested in me."

With a little strategy at an early social gathering of their classmates, Brian soon knew Ally's feelings.

"We were at a house party," Ally recalls. "Brian was hinting that he liked someone he had met before classes started. Because he'd noticed me, but I hadn't met him, I was wondering who he was talking about and thought, 'Oh, he likes someone else,' and felt a little angry."

Brian won Ally over through a strategy of patience and persistence – and making himself indispensable.

"When the course started, we had to install lots of software on our computers, which Ally was having trouble doing because her computer was in Mandarin. She knew I was Korean but didn't realise I could speak Mandarin too, having lived in Singapore from the age of six."

Ally's version of the story suggests she might have engineered that encounter a little herself.

"I didn't know him so well then and called some my friends over to help. When they couldn't fix it, I said, 'Oh, do you know anyone on the course who understands computers?' And a friend called up Brian."

Inseparable thereafter, the couple earned the nickname 'Brally' from classmates and unleashed a wave of relief and congratulations when they finally announced their engagement recently, two years after graduating.

Brian chose the time and place of his proposal well – on the way to a Korean supermarket while walking past Melbourne Business School with Ally – but it didn't all go smoothly.

"I suggested we pop in to MBS for a visit and took Ally over to a quiet spot, but a guy was there on the phone, so we moved nearby. I was struggling to open the ring case, which seemed locked, because we were trying to do it quickly. But I got on my knee, took her hands and proposed."

Since being together, Brally say they have both put on weight because they love food and are equally good cooks – especially of Korean, Chinese and Italian cuisine.

Ally says the secret of their relationship is how well they complement each other. Detail-focused Brian studied computing, while big-picture Ally studied actuarial science before their Master of Business Analytics degrees, which they credit for their love match.

"It's really a story about the nature of the course, which brought everyone in the class together, and we all supported each other," Brian says.

"We now have a very comprehensive gossip network," says Ally. "It was exciting because it was such a new course. Everything is condensed into one year, so it's very intense, but that's why people become so close. We all bonded and helped each other."

With Ally hailing from Shenyang in China's northeast and Brian from Seoul in South Korea, arranging the wedding could be as drawn out as the engagement.

"We have to get our families and friends together somehow,” Ally says. “We're thinking about having the ceremony here and a reception dinner in China or Korea. But we need to book a wedding venue about 18 months in advance, so who knows, we might have to have it at MBS."