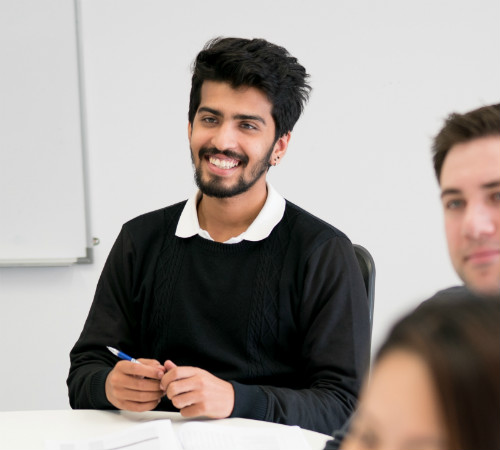 In fact, it's even part of his name.

His classmates call him Kush, but that’s the second of his two first names. He doesn’t have a surname because his parents excluded it from his birth certificate – to protect him from traditional Indian beliefs.

“My parents are very opposed to the caste system we have in India, which is something that surnames feed into,” Kush says. “When you meet someone in India, the first thing you ask for is their name, and subconsciously you try to work out the kind of family they belong to.”

Kush says his parents have a love marriage, which is uncommon in India even now.

“They were sort of rebels. They found each other and went against society and their parents. They endured a lot of hardships and struggle to get married.”

Kush is now studying his MBA at Melbourne Business School, partly because his parents suggested he consider more than just Indian business schools, which include some of the world’s best.

“They encouraged me to look abroad, and I really liked MBS because it's a one-year program – which means only a short time off from my career – and it’s very hands-on,” he says.

Like his parents, Kush is a modern Indian. He studied software engineering at university in Ghaziabad, a planned metropolis near New Delhi and one of the world’s fastest growing cities.

After graduating, Kush worked as a developer in Ghaziabad for one of the world’s largest IT providers, Tata Consulting Services – part of the Tata Group juggernaut that also owns Jaguar cars.

“It was really satisfying because I had autonomy and the trust of my managers and could try new things. I started in the UI department, transferred to back-end development, became the defect manager and then a module lead. Packing all that into a year and a half was really enjoyable.”

Kush is studying his MBA with the help of the Reid Malley Foundation Scholarship, which assists students who demonstrate financial need and outstanding academic performance.

"Receiving the scholarship has really helped me," he says. "It's made me feel more conscious and respectful, more responsible with money because I received support from someone else. When you have so much on your plate, having one less thing to worry about makes a huge impact."

The youngest member of his cohort, Kush is a co-recipient of the scholarship with Sebastian Quaglia, the oldest in his year.

“My young age was another reason I chose MBS," he says.

"In India, the schools don’t have an experience requirement, which makes them homogeneous. They'll be 90 per cent engineers and half of them, straight out of grad school. It's good to be surrounded by people better than you because so much learning comes from your peers.”

Kush hopes he can combine his passion for software with the knowledge he’s gaining from his MBA in his future career.

“It hard to predict where you’ll be in 10 years' time, but you have to take on challenges as they come and always push yourself to get to the next level."

Kush says he’s open to working anywhere in the world when he graduates and will probably return to software development – at least to begin with.

“I think it's more challenging to improve how software is applied in an existing area than create it from scratch. I’m interested in improving existing processes. If I’m given a goal to achieve in 10 days, I want to see if it can be done in nine or eight.”

While an MBA from Melbourne Business School will open up new opportunities for Kush around the world, he doesn't exclude returning to India in the future – though he would like to see it change.

“I am definitely open to going back to India. It's one of the places I really like," he says.

"There are things about it that sadden me sometimes, and you have to respect traditions – they're there for a reason. But when something makes things worse rather than better, you have to change it, and things are changing. I have a very positive feeling about India over the next few years.”