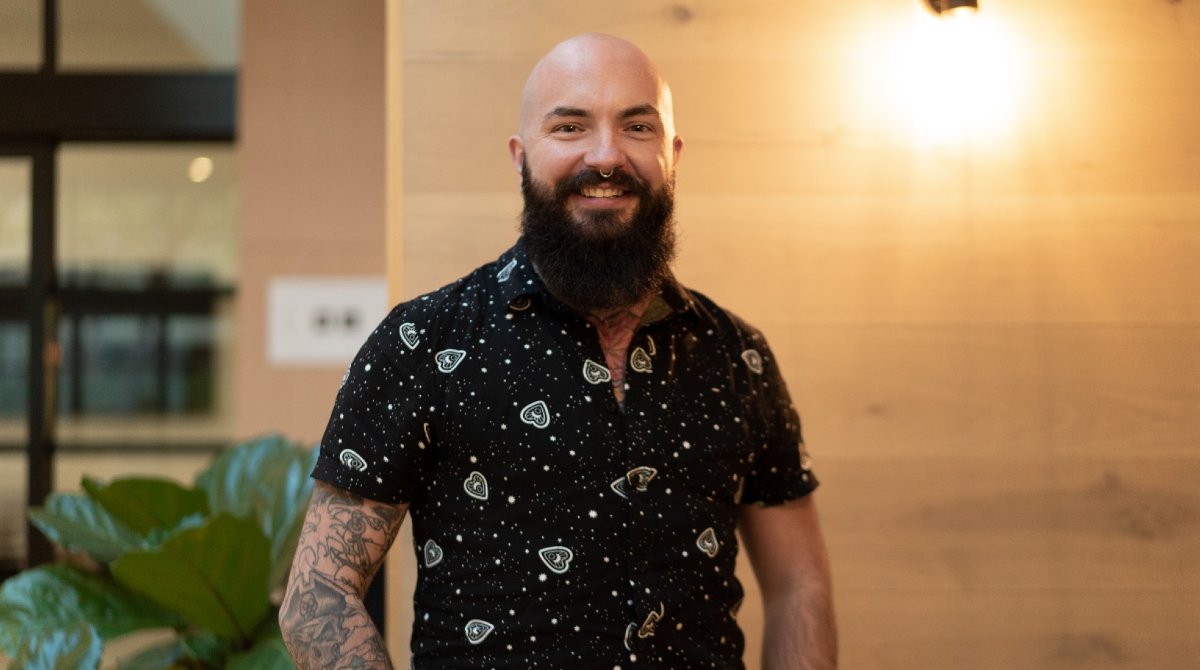 "I'm sure there's been some kind of mistake, something in the universe went wrong for me to get here," he jokes.

Laurie is Head of Ideation and Portfolio Management – Innovation for Australia's largest construction materials supplier Boral, and a member of the graduating Executive MBA class of 2021.

For his cohort, the past 18 months were full of unexpected challenges thanks to COVID-19, travel restrictions and "on again, off again" lockdowns in Melbourne.

But for Laurie, it was just one more surprise on his unconventional path to success.

After leaving high school at 15, Laurie worked at one of Wollongong’s most-loved bars, The Little Prince, where he picked up skills he never imagined would lead to an executive career.

"I loved that job. I started as a glassy, picking up glasses, and progressed to manager, acted as a project manager and did a lot of event management too," he says.

"When it seemed time to move on, I spoke to one of the owners, who asked me if I would be interested in a junior project management role at Boral, where she worked full-time. I've been there seven years now and learned a huge amount."

One of the reasons for Laurie's success at Boral – where his team helped develop the lower-carbon concrete known as ENVISIA – is his conviction that innovation is all about people.

"Innovation isn't just about coming up with a break-through idea or research," he says.

"I work with some very bright technical minds, who leave me for dead. But for innovation to happen, people need to feel psychologically safe to have bad ideas, fail or explore something that doesn't quite go anywhere. That's how you get the one-in-20 or 100 idea that is a breakthrough.

"The next challenge is bringing people along when the breakthrough comes, getting them comfortable with the new normal or the uncertainty that change brings."

The most valuable lessons Laurie took from his time behind the bar have proven to be how to resolve conflict, and how to serve customers.

"I'm highly empathetic and learned a lot in that bar about customer focus and people management," he says.

"That was fantastic for me, because by nature I'm quite introverted. And I learned about conflict resolution by sometimes failing."

As Laurie rose into management at Boral, his success made him increasingly conscious of the gaps in his formal education.

"I've been fortunate to have managers who were confident in what I could achieve, and not so concerned about my prior education," he says.

"But that's not going to last forever. At some point, I knew I could be working for somebody who expected a little bit more proof.

"When I came across the Executive MBA, I saw that it would give me a really broad base of knowledge. I went through the modules, and they seemed highly relevant to the work I do. In any given week, I do some aspect of all of them. It was the perfect option for me."

However, it took some convincing to get Laurie to apply for the program – which he only did after strong encouragement from his boss.

"I felt I wouldn't be accepted," he says. "But I have a very supportive boss, who basically marched me into the initial meeting and made me stay.

"After chatting with a Melbourne Business School representative, I was pleasantly surprised when she said that prior education wasn't the only pathway to entry."

Once on the program, Laurie was again surprised to learn he wasn't the only member of his cohort without an undergraduate degree – or who hadn't finished high school. He was also blown away by the diversity and quality of his group.

"I met a lot of generous, passionate and intelligent people," he says.

"It was an incredible experience. I thought I would be overwhelmed and left behind, but we all had subjects that we struggled through, and there was a lot of generosity, helping educate each other and bringing each other along."

Laurie says the format of the program was also attractive because it allowed him to forget work while he studied. To take part in the Executive MBA, students stay on-site at Melbourne Business School for 17 long-weekend modules over 18 months – traditionally including one module in Asia, when travel restrictions allow.

"The four-day residential study per month really gave me a chance to press pause on work," Laurie says.

"If it had been a couple of nights a week, or in a different format, I wouldn't have been able to focus as well, so the format really appealed to me."

But being Laurie, he can't help thinking it was the people on the program who ultimately made his study experience so special.

"The group was this wonderful rich mix of demographics and backgrounds, experience, industries and reasons for being there. It was amazing," he says.

"I definitely learned as much from my peers as I did from the lectures. The work and life experience in the room was absolutely immense."