Jessica Morrison knows the secret to success includes falling and getting back up again. 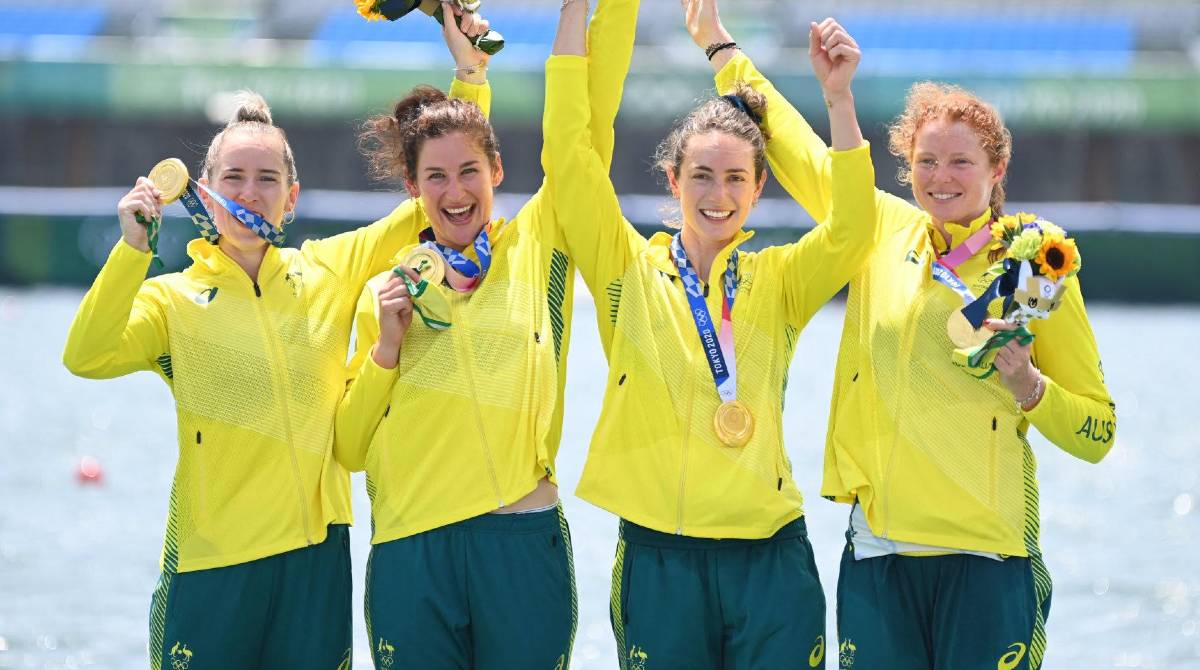 "The only reason I have a gold medal from Tokyo is because I've dealt with failures," says the Senior Consultant at EY and Melbourne Business School Part-time MBA graduate.

Jessica, pictured second from right above with teammates Lucy Stephan, Rosemary Popa and Annabelle McIntyre, was a member of the Australian women's-four rowing team that won gold at this year's Tokyo Olympics, which the COVID-19 pandemic delayed for a year.

"Our team saw that as an opportunity for an extra year of training to get stronger and more resilient, which definitely showed in our performance," she says.

An Olympic-contending swimmer as a teenager in Melbourne, Jessica won an Australian Institute of Sport scholarship to train in Canberra, where injury forced her to have a shoulder reconstruction and switch to rowing in the hope of making the women's rowing team.

"That was the first challenge in my career – changing sports and going from an all-right-level swimmer to rock bottom. I was 21 and really questioning every decision I made," she says.

After returning to her hometown to train as a rower, Jessica worried about life after sport and decided to add a Part-time MBA to her economics undergraduate degree, earned at the Australian National University while in Canberra.

"My dad did an MBA at Melbourne Business School and said it was a great thing to do, and part-time study allowed me to train throughout the day and do classes at night," she says of the experience that reinvigorated her.

"I really loved it. I remember going to the induction day, meeting my cohort and being put in a syndicate and suddenly having some friends. I didn't have many undergrad friends because my sporting schedule meant I couldn't make many classes, and I studied a lot online."

The people Jessica met on her MBA program inspired her both professionally and personally.

"It was really great to get to know all my cohort at a personal level, go out and have dinner and beers with them. Everyone came from very different backgrounds and countries, and they thought it was cool that I was an athlete.

"Being around people who were intelligent and knew what they wanted to do with their life was really inspiring. I was learning from so many different people. And the way they teach the program gives you a holistic view of a business, which allows you to have meaningful conversations with people in every part of a business."

While studying at Melbourne Business School, Jessica made it to the Australian women’s-eight rowing team – but that was just the beginning of new trials and tribulations on the water for her.

The team needed to finish in the top two in a qualifying round ahead of the Rio Olympics in 2016 but ended up third – until the Russian team were disqualified, allowing them to compete.

The crew finished seventh overall – not bad a bad result, you would think, for someone new to the sport, but not good enough for Jessica.

"I always want more, that's what has motivated me to keep pushing," she says.

After graduating with her MBA, Jessica joined EY in 2018 and was this year promoted to Senior Consultant at the firm, which has been hugely supportive of her sporting ambitions.

"I joined EY through their elite athlete employment program, which is unique to EY. They support athletes, and when I said it was my intention to train for Tokyo, they said 'absolutely'."

With EY's support, Jessica was able to work part-time and train full-time ahead of the Tokyo games, where she and her teammates made the finals of the women's four and the semi-finals of women's pairs – a challenge that proved another test of Jessica's character.

"The pairs event was rescheduled because of a typhoon, so we ended up with a day of two very important races only two hours apart," she says.

"The first event was the women's-four final, which was a great result, but, two hours later, in the pairs semi-finals, we missed out on the finals by 0.4 seconds, which was really devastating. I was in tears after that race. I can't describe the high of the four and the plummet of the pair. It was a very bizarre emotional ride."

If the parallels between achieving success at the top in business and in sport seem obvious, Jessica is as good an expert as anyone to give advice on how to be resilient.

"You have to be really patient and willing to work hard. Success doesn't come overnight. It's all self-driven. You can't rely on anybody else. Of course, I need other people's support, but I need to know I can pick myself up, redirect myself and remind myself why I'm doing it."

The photo of Jessica and her team in this article was provided by Rowing Australia.