The story behind the memorial lectureship to honour Sir Donald Hibberd

One of Australia's great nation-builders, Sir Donald Hibberd, had an enormous impact during his life – but the fact that he's continuing to shape the world after his death is all thanks to his wife.

The Sir Donald Hibberd Lecturership at Melbourne Business School was established in honour of Sir Donald, who held influential positions in the public service during the Chifley years and helped to create Australia's $10 billion aluminium industry.

The lectureship allows the School to bring international experts to Melbourne to ensure the growth of Australia's next generation of leaders.

According to Sir Donald's son Adrian Hibberd, the idea came to his mother – Lady Florence Hibberd – in the hours after her husband's death.

"He died at the age of 66 of a massive heart attack on New Year's Eve 1982, two days after a major cancer operation, an horrendous occasion. It was tragic.

"That evening, we were all gathered around his bedside – my sister, her husband, my wife, mother and myself – and Mum had had enough. She was in tears and said: 'Don has died, and we'll have to find other leaders to replace him.'"

Lady Florence led the push to establish the Sir Donald Hibberd Lecturership two years later in 1984. In the decades since, it has brought some of the world's most advanced leaders to Melbourne Business School.

"My mother was delighted to meet and talk to each of them," says Adrian's sister Christine Penfold of the Hibberd appointees.

The first Hibberd appointee was Prof Nigel Slack, who is now Emeritus Professor at Warwick Business School in the UK. The 2017 Hibberd Lecturer was Cordelia Fine, a psychologist and author specialising in neuroscience and gender. Her most recent book, Testosterone Rex, won the prestigious Royal Society Science Books Prize in Britain last year. 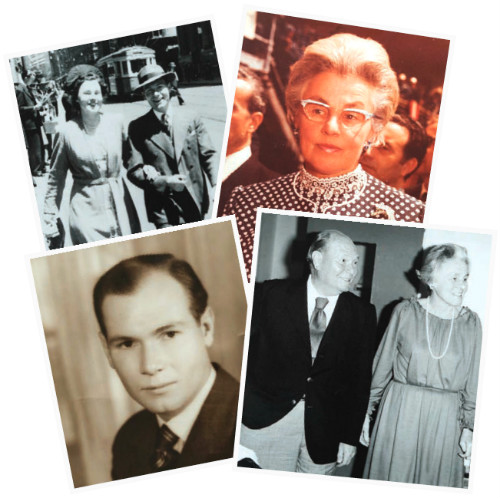 "My mother wanted to create a very dynamic and living memorial to leadership, which this lectureship achieves," says Adrian.

"I am proud it has continued for so long and put forward such a diversity of excellent thought leaders."

The Sir Donald Hibberd Lecturership is just one of the ways Lady Florence contributed to the community. She was also an active charity worker and childhood education expert with the Australian Preschool Association.

The life of Sir Donald

If it weren’t for the Great Depression, Sir Donald would have become a surgeon. Instead he became an exceptional nation-builder and the first head of aluminium giant Comalco.

After gaining a scholarship to Sydney’s selective Fort Street High School, he secured one of only three scholarships available to study medicine at the University of Sydney, but then the Depression intervened.

With his father struggling to support the family, Sir Donald decided to study economics at night and work by day at the New South Wales Auditor-General’s office. On the eve of World War Two, he joined the public service and was soon noticed.

In 1953, he became first assistant secretary of Treasury’s banking, trade and industry branch and a member of the Australian Aluminium Production Commission, before being tapped to head Comalco in 1957.

Producing aluminium, used in everything from cars and cans to consumer electricals, is a complex process of mining bauxite, refining it into alumina and smelting that material into the metal.

In 1957, Australia had the world’s second-largest bauxite reserves but mined very little. It also had limited refining capacity, a small government-run smelter in Tasmania, and insufficient capital to develop the industry on its own.

Under Sir Donald’s leadership, Comalco brought together governments, investors, producers and end-users from around the world to exploit the vast bauxite reserves at Weipa at Cape York, establish aluminum refineries at Gladstone in Queensland, and develop and supply smelters in Tasmania, New Zealand and Italy to serve the Europe, US and Japan markets.

Sir Donald never did become a doctor as he had originally planned, but both Adrian and Christine did. Adrian is one of Australia's leading surgeons who heads the renal transplant unit at the John Hunter Hospital in Newcastle, while Christine is a former Sub-Dean of the University of Melbourne's Faculty of Medicine.

“He really was a great leader, a great nation-builder, but very modest within himself. There was no element of self-grandeur or wanting to be out there publicly, but Comalco was his passion," Christine says.

It's that sort of leadership that Lady Florence has kept alive through establishing the Sir Donald Hibberd Lecturership. Lady Florence passed away in 2008 at the age of 95, but continues to improve society through the program – which is now as much her legacy as Sir Donald's.

"She really thought that what he'd done, and who he was as a person, were very worthwhile. She didn't want his legacy to just stall and not be recognised."