The inside story behind the artworks at Melbourne Business School

Melbourne Business School is home to works by some of Australia's most famous artists, including an Arthur Boyd piece created specially for the space. 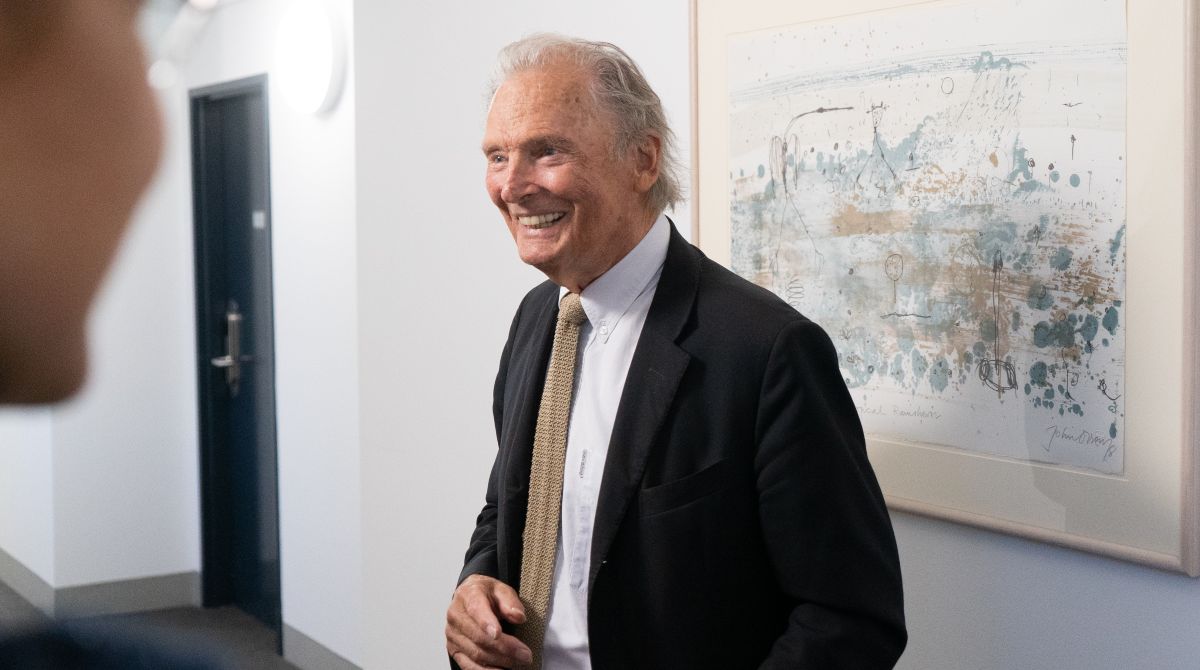 The School's collection includes works by Indigenous artists such as Gloria Petyarre as well as Boyd, J. M. W. Turner, John Brack and Leonard French, who created the famous stained-glass windows at the National Gallery of Victoria.

Shortly before the lockdown brought on by COVID-19, Emeritus Professor John Rose visited the School to reconnect with colleagues and explain the origins of several of the pieces on display.

Professor Rose was director of Melbourne Business School from 1983 to 2001 and continued the practice of chairman John Gough in encouraging friends of the School to bring the building alive with art that reflected Melbourne's history and modernity.

"John Gough, of Pacific Dunlop fame, had this mindset of the whole place being for business and filled with art, and he saw to it that there was a stream of funds to purchase many of the artworks that you now see around the School," Professor Rose said.

Between them, the two leaders helped put together a diverse collection that is dominated by the massive canvas of the Shoalhaven River in New South Wales, painted specially for the School by Arthur Boyd, one of Australia's greatest 20-century artists.

"It's my favourite, yes, and probably the most outstanding artwork we have," Professor Rose said. "But I wasn't behind getting it, that was John Gough."

Accompanying Professor Rose on the art tour were current Dean Ian Harper, Deputy Dean Caron Beaton-Wells, Chairman Ross Barker, and former lecturer Philip Williams, an avid art collector himself, who remembered how the Shoalhaven Boyd found its way on to the walls.

"The vice-principal of the University of Melbourne, Ray Marginson, was a friend of Arthur Boyd and asked him if he could paint a picture for a space near the entry to the School, which he agreed to do," Dr Williams said.

Another valuable piece is a large, 1871 lithograph map of early Melbourne, which shows the Turning Basin on the Yarra River, near the current Aquarium, where boats once turned around after unloading and loading goods and passengers in the city's early years as a fast-growing international trading port.

"John Gough and the renowned architect of the building, Daryl Jackson, wanted the art and layout of the School to recognise the business history of Melbourne and the fact that it was a port," Professor Rose said.

The lithograph is part of a collection which includes several photographs of early Melbourne, donated to the School by Vietnamese businessman and alum Le Thuan.

"Le was very generous to the School and brought quite a number of students and executives to us," Professor Rose said.

The longest-serving director of Australian mining giant BHP, Gordon Darling, was another generous contributor, who, together with his wife, Marilyn, provided a rare set of prints by notable Indigenous artists including Petyarre, Johnny Bulunbulun and Judy Watson.

"They were all by leading artists and published together, but very few complete sets were made available, and Gordon Darling and his wife gifted one set to the School," Professor Rose said.

And there's another, even more valuable Boyd, donated by former ANZ Bank CEO Will Bailey, but it's hidden away and rarely seen because of the reaction it often invokes, said Professor Harper.

"Will Bailey didn't want it in his office, so he gave it to John Rose, and it was quietly moved to one of our private meeting rooms," he said.

"When I brought John there recently, the first thing he said was, 'You haven't got that painting on the wall, have you?'"

The controversial work is part of a series that Boyd painted depicting the biblical story of King Nebuchadnezzar, according to Dr Williams.

"It's based on the story in the Book of Daniel and part of an important series, but Boyd had quite an imagination. While I'm not an expert, and it doesn’t appeal to everyone, I think it's probably our most valuable painting," he said.

Since John Gough and John Rose started the School collection, paintings borrowed from other sources have been added to the walls as well, thanks to people with strong links to the art world.

"Margaret Manion is an Australian art historian and curator, who chaired the University's academic committee that oversaw the School," Professor Rose said.

"She helped us gain permission to hang paintings from the University of Melbourne collection that you also see around the School, and she taught art appreciation and understanding to our executive education students."

Other paintings are borrowed from the Federal Government's Artbank – a move first suggested by Lesley Alway, the former head of Arts Victoria, the Heide Museum of Modern Art and Sotheby's Australia.

"Lesley started her PhD here, and I was her supervisor," Dr Williams remembered.

Thanks to the contributions of Lesley, Margaret, John and others, a new generation of students is now enjoying the collection while they learn at the School.

"These artworks are more than just incredible pieces – they form part of the DNA of Melbourne Business School," said Professor Harper.

"I can only imagine what else will be hanging on the walls in 50 years, as the next generation leaves its impact."