Hugh Williams is a distinguished fellow, not just because that’s his role at our School’s Centre or Business Analytics but because he also helped build Microsoft’s Bing search engine, lead Google Maps’ engineering and product teams, and turn eBay around. 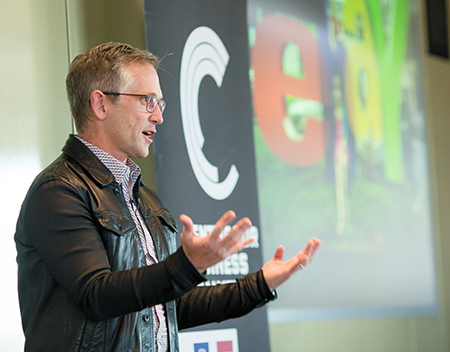 The seasoned Silicon Valley insider and final speaker in our Talking Data Series for 2017 said his eBay experience was a lesson in just how much business success depends on technology and a good customer experience.

“When I arrived in mid-2009, eBay was in trouble. The share price was at an historic low, well off its near-$60 historical high. It was cutting costs, growth was negative, market share shrinking, and the technology team wasn’t empowered to innovate.”

As a Vice President of Engineering and Product at eBay, Williams set about fundamentally rebuilding the eBay technology stack, cutting its many goals to just one, and giving his team the power to improve the eBay buying and selling experience.

“The key ingredient for every successful tech company in the Valley is to make engineering an ideas powerhouse and equal partner, and that wasn't the case when I joined eBay. But with the help of the C-team, we sure fixed that pretty quickly.”

By bringing in a new CEO, new CTO, and an influx of Microsoft executives, eBay gave Williams the support he needed to revitalise the engineering team and build it into an equal partner, alongside the rest of the business.

After four years, his 1000-strong team was delivering innovative products, including a new home page and search engine, recommendation algorithms, algorithmic marketing, and sales flows. After unifying his team around a single goal, Williams was able to fund all this work from the years of incremental business growth his team were delivering.

“When I arrived, my team had a ton of different goals, none of which were really about building a better customer experience but more about internal processes and software delivery. Changing to a single, unifying goal, focused on increasing sales, was pretty powerful.  It’s a very customer-centric choice to say your only goal is to sell more – but that’s what sellers and buyers want, and what we were ultimately paid to do.”

Williams admits that change is never easy. “If you've got a business team that's used to telling the technology team what to do, it's hard to change that to everyone having an equal say. It’s also hard to tell team members who are used to the old ways that we’re going to be doing something else and that success is now measured in a new way.”

But the hard calls paid off. “Once we were focused on driving up sales, the first thing we did was speed up the site. It was so darn slow that customers were abandoning the experience. So, in the first three or four months, we were able to measure the speed increase and show a dramatic increase in sales.”

“If I wind the clock forward two years from the beginning, we were able to persuade the CFO to fund a new search engine and invest in new data infrastructure.”

In 2012, eBay’s share price increased 65 per cent, and the company enabled about $175 billion in commerce – which was around 19 per cent of global e-commerce and near two per cent of the global retail market – a spectacular year by any measure.

“The CFO was looking at the teams who’d led the way and saying, ‘You guys have completely turned this business around. What else can I do for you to get more of this?’ It was quite a change from 2009.”

Support from the top

Williams credits his eBay success to support from the top at the very outset. “The CEO, John Donahoe, really believed that the technology team was the way out of the jungle. He gave Mark Carges, our CTO, a lot of air cover, and the CTO gave me a lot of air cover.”

Williams says the biggest lesson learnt from helping turn eBay around is that most companies are now tech companies.

“Companies need world-class tech teams, led by a strong leader, sitting at the table as an equal partner, and unlocking the value that technology teams can unlock. That’s going to be true in everything from manufacturing to the auto industry to agriculture to insurance to banking.

Listen to our Hugh Williams podcast, Lessons from Silicon Valley: Success is in the data.

Read about our previous Talking Data speakers in 2017:

And find out more about our Centre for Business Analytics.