In a pre-season warm-up to our main recruitment month in February–March, Microsoft was on campus recently to talk to our MBS students about MACH – the Microsoft Academy for College Hires, which two of our recent graduates have attended.

Microsoft University Recruiter Weng Pui Lam told the audience of potential MBA recruits that it’s an exciting time to join the computing giant, which celebrated its 40th anniversary this year and is reinventing itself under new CEO Satya Nadella.

From software to everywhere 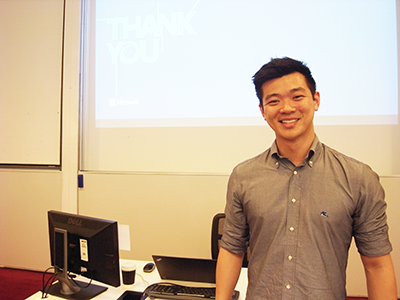 A software company for most of its existence – 20 per cent of the world's population use Windows, and about as many its Office suite of programs – it now produces its own mobile devices and provides cloud services to compete with Apple, Google and Amazon.

“We are the productivity and platform company for the mobile-first and cloud-first world,” Weng said. “These are our big bets over the next eight years.”

He said mobile first is not just about mobile devices but being always connected and able to work from anywhere. Cloud first enables that mobility and also captures data to provide new insights, including for machine learning.

“This is not just how Microsoft sees the future. It's how Amazon, Google and every big tech company sees sees the world.”

Weng said rapid change and the need to stay competitive has seen Microsoft transform from a heavily siloed company to an open, collaborative place to work with a flat organisational structure.

“Because the industry changes so fast, it forces a lot of soul-searching within organisations, and it forced Microsoft to operate much more leanly. One thing we’ve learned is that collaboration is very important.

“Since Satya's arrival as CEO, he's been very focused on collaboration. We tore down the stack-ranking system for how we provide benefits and review employees, who used to rate who they liked most or least. That's gone. It's now a connect system, based on how you've helped other people, yourself and your team achieve more.”

“But the most important thing you get from MACH is the networking opportunity. A major part of the training is the MGX, the Microsoft Global Exchange, which happens around August or September in Orlando, Florida, every year.

“We book out an entire football stadium and have thousands of Microsoft employees from all over the world arrive there. You leave knowing so many people, which is really good if you're thinking about a global career because, about 80 per cent of the time, your next role is pretty much known from the network you have.”

“You also get high leadership exposure, which, coupled with the fact that Microsoft has a very flat structure, really helps you reach out and leverage your own personal growth.”

“He's just three months into his role but heavily into it, and the feedback I'm getting about him is extremely positive,” Weng said.

Chanpreet Saluja (MBA 2013) is another Microsoft hire from the School. He undertook his part-time MBA while working at Microsoft and is now a Senior Solutions Architect in the company’s head office in Redmond, Washington.

“He was a heavy technical person, heavy on programming, architecture and modelling, but he really wanted to understand how the stuff he was doing impacted on Microsoft’s customers and business clients.

“He told me that doing his MBA really allowed him sandbox or to play around with ideas while transitioning into his new role. It was good timing too because, when he was accepted into his MBA, he was pivoting into a pre-sales role, so he could apply what he learnt to his work.

“Now he’s gone into his new role as a senior solutions architect. He reports globally, and he’s basically the product manager for customer relations management, which is one of the biggest bets we have at Microsoft.”

Weng said Microsoft will always depend on great software engineers to create great products but can’t succeed unless bright people communicate that value to the world.

“We're looking for talent like you guys to help enable our customers through marketing, sales and support across Australia, New Zealand and the greater APAC region.

“What I like about working at Microsoft is its flexibility. In some companies, if you work in finance, you stay in finance for the rest of your life. But Microsoft is not like that. You can start in sales and grow horizontally, diagonally, vertically or however you like.

“Our General Manager of Microsoft Australia, Pip Marlow, also encourages flexibility. You work how much you want, how you want. You come into the office and leave at whatever time you want as long as it suits your own priorities, and you get your work done on time.”

See you in March

Weng will return to Melbourne Business School on 3 March 2016 to recruit more of our MBA students, accompanied by members of the company’s senior leadership team, and possibly Tristan and Chanpreet if they’re not too busy bedding down new products as Microsoft pushes for greater market share.