When she learned that Russia had invaded her home country, Olha Lyeskakova jumped into action using skills she learned at Melbourne Business School. 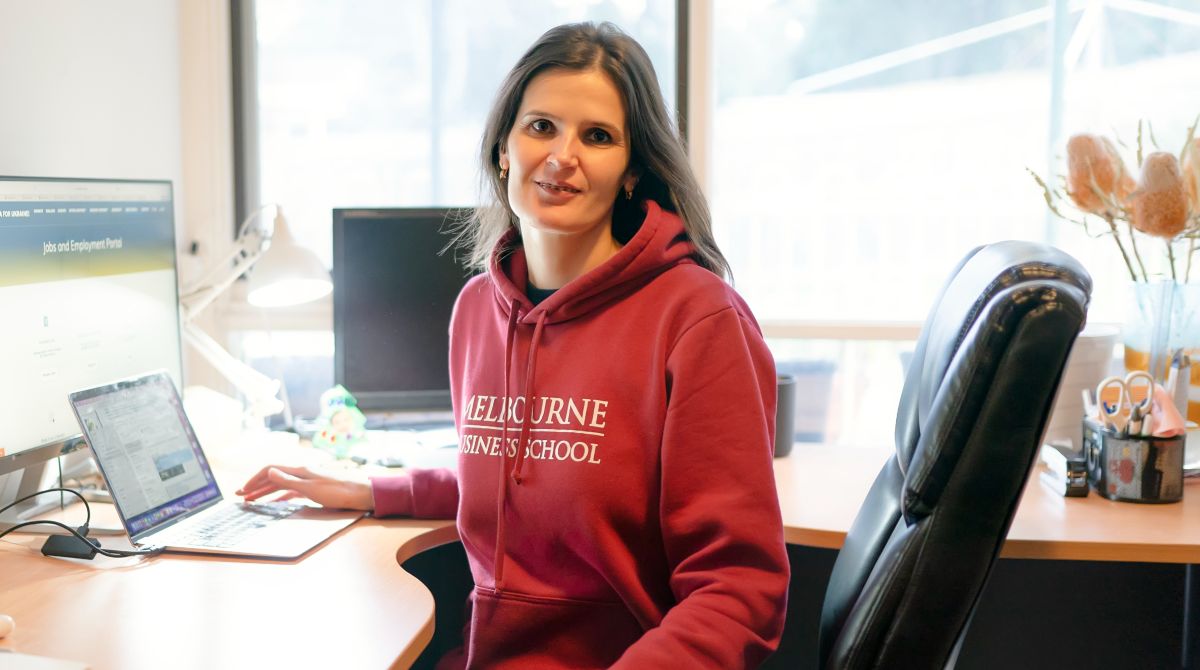 For the past six months, Olha has been working with Australian officials to open the doors to refugees fleeing Ukraine, as well as helping them to find accommodation, employment – and each other – once they arrive.

Olha's success is due to her own tenacity and passion, however, she also credits part of it to the lessons in people management she learned at Melbourne Business School, particularly from Associate Professor of Organisational Behaviour Carol Gill.

"Managing People was my first full-term subject and the right time for me to meet Carol. I was so impressed and engaged with the subject," she says.

"It's the space where I feel very confident and comfortable, and Carol just added more confidence by explaining a lot of psychology and basic things when working with people – how to manage stakeholders at different levels, how to make people adopt something, how to be a leader.

"It was all from that subject."

Olha's experience applying those lessons to the challenges of her own extraordinary life convinced her to apply to study a Part-time MBA later this year after completing her Master of Marketing – while continuing to advocate for Ukrainian refugees.

Support from Melbourne Business School donors is also helping Olha study while she devotes much of her precious time to her advocacy work.

The winds of war

Olha's own journey to Australia began in 2014, when she decided to emigrate. It was the year Russia reclaimed the Crimea and pro-Russian separatists took over the Donbass region of eastern Ukraine.

""Everyone was scared at that time. That was when the current war actually started. I have two kids, and their safety was the main motivator for me to start the process of migrating to Australia," she says.

Two years later, Olha was living in Australia as a permanent resident, first in Melbourne, where she enrolled in the Master of Marketing degree at Melbourne Business School, and then in Sydney, where she worked in senior marketing roles.

Her busy life intensified on 24 February this year, when, in a work meeting, Olha learned that Russia had invaded her homeland in the middle of the night, while her relatives and friends back home were sleeping.

"It was 2pm in Sydney, and I was shocked. I closed all my meetings and started waking up all my friends and relatives in Ukraine. My mum was sleeping, my sister was sleeping. No one expected it to happen. An hour later, my mum, sister and baby niece were heading toward the western part of Ukraine on their way to Poland."

Olha’s brother-in-law drove them to the border but didn't cross, because men generally can't leave Ukraine. Her father, who could have left legally, decided he couldn't abandon the family's affairs in Kyiv so abruptly.

"It was a mess. I was sitting here in Australia and looking at the news and chatting to them via Facebook Messenger about what roads to avoid and which way was safe."

"It was a nightmare," she says.

"We don't have any relatives or friends in Poland. But, thanks to the Polish people, everything was provided, and they lived in a hotel and were fed and supplied the basics – but my objective was to bring them here."

Having moved so quickly, Olha's mother, sister and baby niece were at the front of Poland's first wave of Ukrainian refugees and pushing bureaucratic rules to the limit. Australia issued Olha’s fleeing family visas in just two days, but when the trio arrived at the airport to leave, they hit a snag. 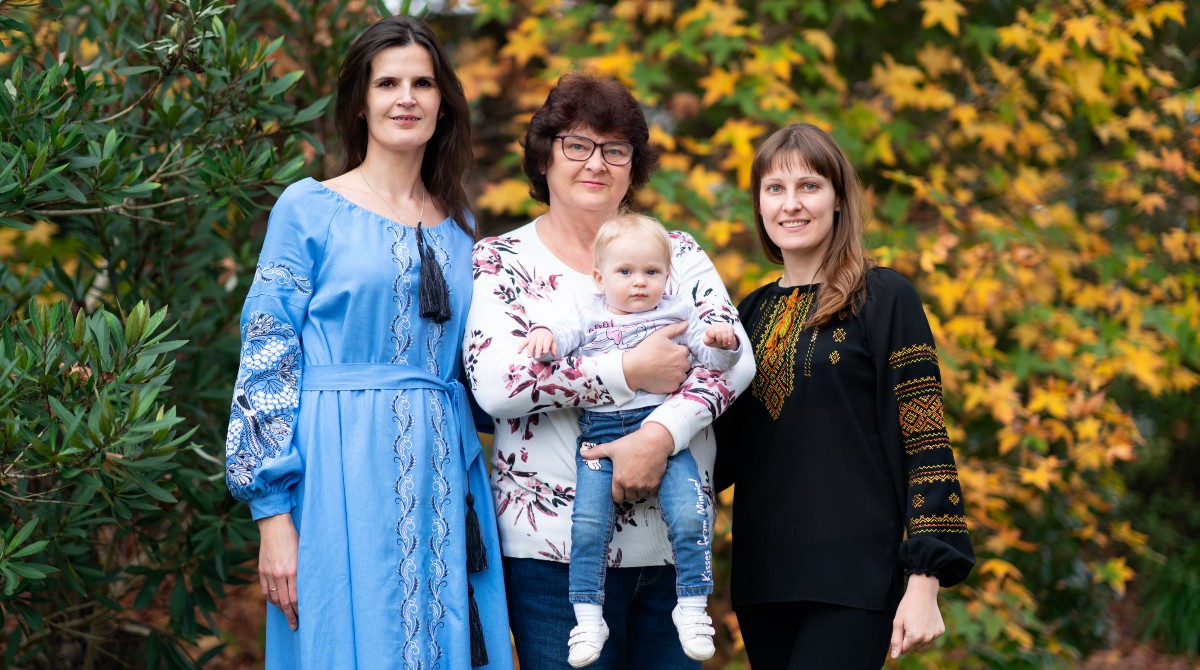 "My baby niece was nine months old and only had a birth certificate. The Australian Government issued her a visa without a passport, but when my mother and sister got to the airport, the airline wouldn’t let the baby board without her own passport.

"It was about 4am in Sydney, and I wasn't sleeping. We lost a huge amount of money on the air tickets, and that’s when I started pushing for a solution with the Australian Government through our Ukrainian community here."

Working through the Australian Federation of Ukrainian Organisations (AFUO), Olha sought to find a way around a rule that all airlines were imposing.

"My niece was the first person to face this issue, so, I went straight to Kateryna Argyrou, the co-chair of the AFUO who was communicating with the Department of Immigration. We started developing pathways for Ukrainians without travel documents to come to Australia."

The Australian Government quickly issued Olha's niece an ImmiCard and then implemented a new approach to allow children without a passport to travel on an adult’s passport.

But stories soon emerged of adult Ukrainians stranded without a valid passport, and Olha and her community worked with the Ukrainian and Australian governments to solve that problem.

The result is 4000 Ukrainians now settled in Australia, with another 4000, mostly men, holding visas they can use when able to leave Ukraine. But that’s not the end of Olha’s story.

With the closest females in her family safely in Australia, Olha realised that refugees like her sister and mother need jobs to have decent accommodation and income, so, she started developing an accommodation database and then a jobs portal on the ukrainians.org.au website.

"We created web forms for people to give us contact details, improved It and then created a team to match people arriving with places to stay. It was 24/7, and we had no weekends or holidays, until the government supported handing over the work to humanitarian settlement providers.

"Then my team transferred to assisting with employment by creating the job portal for Ukrainians. We launched English online, engaged an HR person and a CV specialist, and worked with employers to relax some employment requirements."

Among the beneficiaries of Olha’s efforts are her sister, a qualified engineer.

"My sister is a biotechnologist with intermediate level English, which isn't enough to get through a normal interview process here. Through our job portal, she found a job. I took her to meet the employer, who was happy to consider someone with her skillset.

"She’s just started the job and has her own place, and there are multiple cases like that, where we are helping people communicate and matching them with employers."

On her own job front, Olha is now a consultant for IT service provider ASG Group and Project Team Lead at the Community Migrant Resource Centre – and, because of financial support from Melbourne Business School donors, she has been able to give up a paid marketing job to devote more time to her work with Ukrainian and, now, other refugees.

“I always had my own sense of being a leader, but the support I received from donors and in class at Melbourne Business School gave me the confidence to stay on track in helping displaced people start a new life in Australia.”