How Jimmy Mouzakiotis went from police officer to Starbucks executive

When Jimmy Mouzakiotis entered his first Aldi store more than 10 years ago, he was a policeman investigating a small crime. 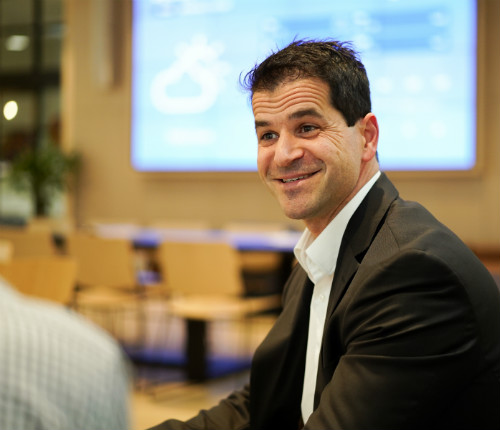 Eighteen months later, he was working for the company on a new trajectory that would take him into the senior levels of retail management.

The Executive MBA graduate, who now heads property at 7-Eleven and Starbucks, says his background in law enforcement was surprisingly handy for his new career.

“Policing helped me become a stable manager,” Jimmy says. “I don't bring emotion into the workplace. In an intense environment, I can steer people in the right direction so they don't feel overcome by emotion.”

Jimmy comes from a long line of police officers. After his family migrated to Australia from Greece, he grew up hearing stories about their experiences.

“My father, his dad and his father's father were all policemen, generally military policemen. It’s kind of embedded in the blood.”

After high school, Jimmy spent five years as a military policeman, while studying his undergraduate degree before joining Victoria Police. He was then stationed in the Melbourne suburbs of Heidelberg and Northcote, where burglaries, car thefts and drug offences presented some tough situations – and opportunities.

“At times, you could de-escalate domestic situations between husbands and wives, or kids involved in the drug scene. That was a far more positive experience than catching someone stealing a car.”

Jimmy also spent time volunteering with students who were having difficulties in high school.

“These are kids were really struggling to integrate for whatever reason – their backgrounds, lack of family support, not doing well at school. You had to keep them on track. I would sit down and talk with them about life, try to mentor them. It was a super-effective program in my opinion.”

Rather than wait for the slow-moving wheels to turn in the police force to reach senior levels, Jimmy took the plunge and applied for a job at Aldi, just as the German retailer was starting out in Australia.

Not long after becoming an area operations manager in Melbourne, he was asked to project manage the redesign of a new Aldi store concept. Success there brought promotion to Director of Buying – his third role in a new functional area within four years.

“That’s what I really wanted to get out of my career. For me, to be a good executive, you need to understand the diverse and sometimes competing functions of a business. Many levers pop up and down. To operate them, you need understand how different areas function and work together."

After becoming Director of Property at Aldi, Jimmy enrolled in the Executive MBA program at Melbourne Business School, an 18-month part-time degree that allows rising executives from around Australia to study on extended weekends while still working.

“I wanted to broaden my skillset, look at financial concepts, and understand how things work from a whole of business perspective. Studying full time for intense periods and then going back to work with new knowledge was amazing.”

Earlier this year, Jimmy became Head of Property at 7-Eleven Stores and Starbucks, jointly owned in Australia by the Withers and Barlow families.

“At 7-Eleven, we have about 680 stores and looking to add an average of 30 sites a year, so I’m applying discounted cash flows, net present values and what I learned on my MBA every day.”

He says the growth of Starbucks is still in the early stages while growth at 7-Eleven is more mature, but his team of 12 drive each companies’ different growth strategy.

Jimmy’s advice for anyone keen to advance their career – for what it’s worth, he says – is to get diverse experience at the company you’re already at before looking elsewhere.

“I encourage people to grab any opportunity to broaden their experience in their current organisation. It’s difficult to get new experience elsewhere because you’re expecting to learn a new function without knowing the processes and culture. Moving internally puts you in a great position to do what you want to do later.”

Find out more about our Executive and other MBA and Master’s programs on our Degree Programs page.