The contributions of two Melbourne Business School alumni have been recognised with the awarding of the School’s highest honour.

Peter Barnes (MBA 1968) and Catherine Walter (MBA 1988) were named Honorary Fellows by the Dean of Melbourne Business School, Professor Zeger Degraeve at the Annual Alumni Dinner on 6 October in Melbourne.

The Honorary Fellowship is bestowed on those who have made an outstanding contribution to the School and the wider Australian business community.

RELATED: Awarding the best in business

Peter Barnes was one of the new breed of young businessmen in Australia who undertook the MBA at Melbourne Business School in the late 1960s.

“We were the third or fourth group to go through and there was a very, very strong demand for these newly-trained people in business,” Peter said.

“A lot of us had support from large companies to come and complete a full-time year and I think, my observation is that by doing the course, I’m not going to say you had a halo but you certainly had a special acceptance in the organisations into which you went because of the course.

“It meant something quite unique at that time. And there were very few MBA qualified people in the late 60s in Australia.” 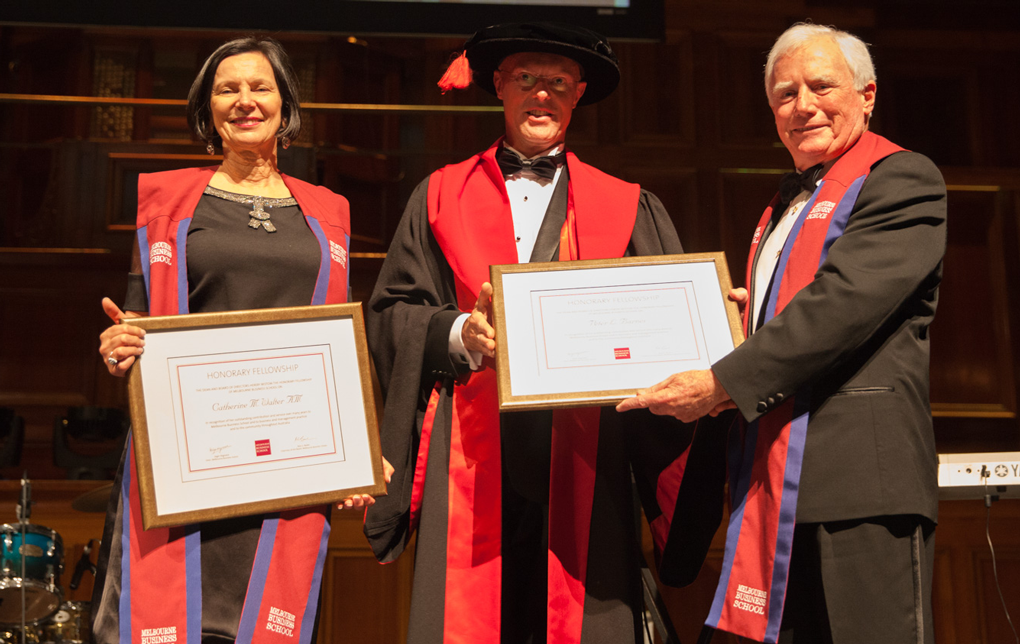 Peter worked in New York for many years before moving back to Australia and reconnected with Melbourne Business School when he joined the Board in 2010 and was Chairman and Director (from 2011) until 2014.

At the time Peter was also the Chairman of Ansell Limited, which was previously known as Pacific Dunlop until 2002. (The late John Gough, one of Melbourne Business School’s founders and most dedicated supporters, was Pacific Dunlop’s chief executive for many years.)

Peter was an influential figure in determining the School’s direction during these years and said MBS was an important place.

“The School has provided, as an institution an opportunity for many, many, many thousands of people to undertake executive education, proved their skills, their understanding of business,” Peter said.

“The School is a captivating place. It’s got some very interesting people here.”

Peter is currently Lead Director of the News Corp Board.

Catherine “Cathy” Walter AM is a significant figure in Melbourne’s business community and has served on a number of company and non-profit boards for more than 20 years.

On completing her MBA in 1988, Cathy became a Managing Partner at prominent law firm Clayton Utz – a trailblazing role for women at that time.

“I didn’t actually spend too much time in reflecting how surprising it might be to other people, or other people in the firm or other managing partners in other law firms that a woman was in the role it was more a sense of doing the job well,” Cathy said.

While she was head of the Melbourne Business School Alumni Association, Cathy co-founded, with Professor Amanda Sinclair, the Women and Management Dinner, which will celebrate its 25th anniversary in 2017.

“It’s interesting when you have women speak about their careers, they tell the career story but they also interweave with it the personal story and that made it a dinner with a very different feel from many of the other business dinners at the time,” she said.

Cathy was also a member of the School’s board of directors from 1995-2011 and is also on the Board of Trustees for the Helen McPherson Trust, which distributes grants to charitable institutions in Victoria.

In 2003 she was honoured as a Member of The Order of Australia for service to business, particularly as a director of several public companies.

Cathy said education was “transformative” and her MBA at MBS changed her career “absolutely”.

Click here to discover more about Melbourne Business School alumni and their achievements.