For Jimi Maroudas, listening is key to success in music and business

Working on a complex problem for the Melbourne Recital Centre gave Jimi Maroudas a chance to combine his passion for business as well as music. 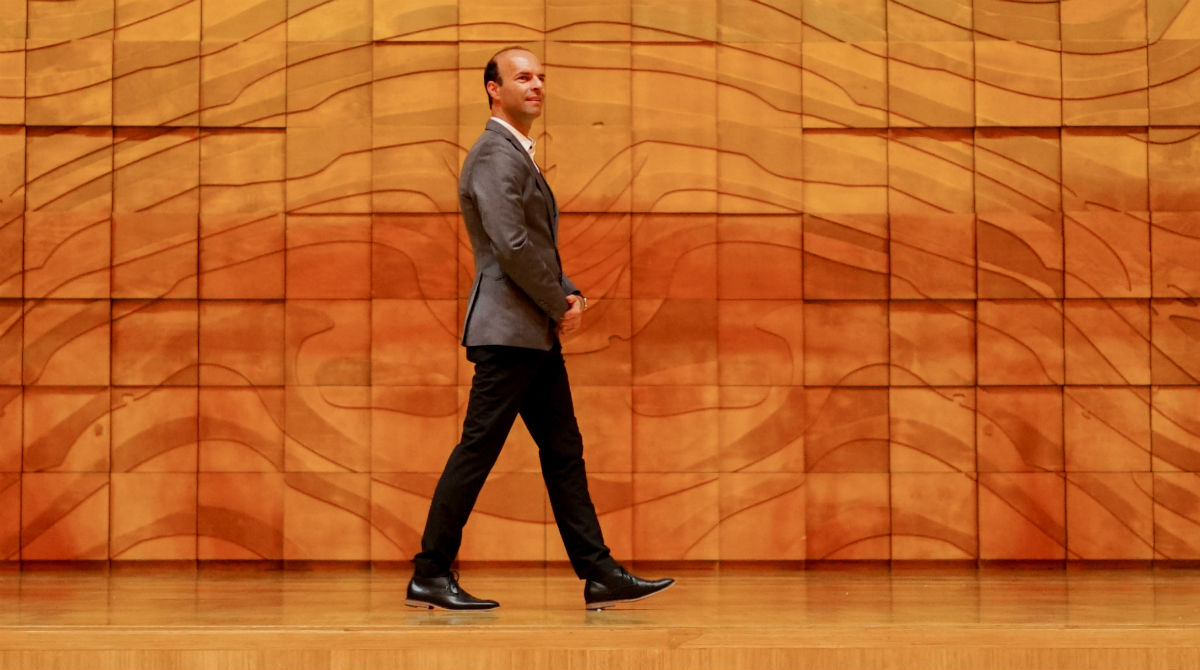 Jimi had already made a name as one of Australia's most recognised record producers when he decided to study a Part-Time MBA at Melbourne Business School.

"I'm a bit different in that my background is as a record producer," he says. "I've been fortunate enough to work on numerous Number 1 records, including several that have received ARIA Awards."

Those albums include The Living End's State of Emergency, Pete Murray's See the Sun and Eskimo Joe's Inshalla. His work on the latter earned Jimi an ARIA nomination of his own for Engineer of the Year in 2009.

Thanks to his background, Jimi's experience made him the perfect fit to consult on a complex business challenge for the Melbourne Recital Centre during his MBA studies.

"The Recital Centre came to us wanting to ensure that its Learning and Access programs were sustainable for the long term. My background in music helped open the door for me to take the opportunity," he says.

Working on the Learning and Access programs was a unique chance for Jimi not only to help the centre, but make a significant impact on the community.

"The Learning and Access programs cater for audiences ranging from children, students, people in regional areas and the elderly," he says. "It's deeply aligned with the organisation's purpose, which is to serve all Victorians."

The challenge gave Jimi an opportunity to apply what he had learned on the MBA to a real-life organisation as it was operating.

"I interviewed everyone from the program coordinator right through to the CEO," he says. "By asking the right questions and actively listening to gain a deeper understanding, I could see what the issue was."

For Jimi, the decision to go back to university came after reaching a point in his career where he felt the desire to grow and learn new things.

"I was established in the music industry, the kids were settled in school, I had support on the home front – so the timing was right to go back and study," he says.

"Once I decided it was going to be an MBA, I didn't apply anywhere else. It was always going to be Melbourne Business School. It's the best in the country, it's in my hometown and I wanted to learn around the best, basically."

So far, Jimi has approached studying with the same work ethic as music production – and seen similarly excellent results.

"I'm a little over halfway through the program and I've received three Dean's awards in Business Law, Financial Management and Operations. That's been personally rewarding, because they all areas that are very foreign to me," he says.

Jimi's MBA studies and experience with Melbourne Recital Centre have been an important part of his journey towards taking on new challenges – while also helping make a difference in the world.

"I'm looking to spread my wings beyond the music sphere, and this was a wonderful first step. I found the experience one in which I was able to both make a valuable contribution to the organisation and grow personally," he says.

"The MRC Board has since approved the recommendations that came out of my report, so the Learning and Access programs can continue for the benefit of the Victorian community for the long term. That is deeply powerful."