Professor Ian Harper, Reserve Bank Board Member and one of Australia’s best-connected and most distinguished economists, will become Melbourne Business School’s new Dean in March 2018. 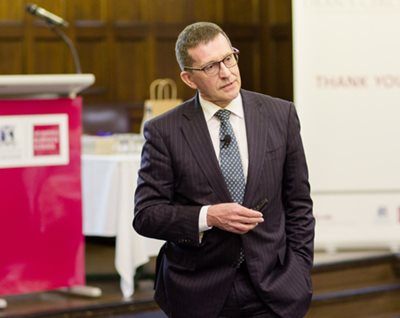 Professor Harper has been involved in many landmark government initiatives over the past two decades, including the Competition Policy Review of national competition regulation, the Fair Pay Commission and the Wallis Inquiry into financial market reform.

He joined the Reserve Bank Board in July 2016 after retiring from leading economics consultancy Deloitte Access Economics. His academic career, teaching and researching public policy, finance and regulation, spans more than 30 years, including 16 years as a Melbourne Business School professor.

“It is wonderful to have Ian back again at Melbourne Business School after such an outstanding career as an advisor to business and governments at the most senior levels,” School Board Chairman Ross Barker said.

“Our challenge is to equip current and aspiring business leaders as they face disruption and look to develop the new opportunities that are transforming Australia and the global business landscape. Ian’s outstanding credentials make him an ideal choice as our new Dean.”

Professor Harper said he is honoured and excited to be returning as the School’s sixth Dean.

“It is one of Australia’s best business schools and aspires to be ranked among the best in the world. As the challenges facing organisations become more complex and global, it’s crucial that the School continue to identify and nurture the talent organisations need to achieve their goals,” Mr Harper said.

Professor Harper’s appointment means he will also become Co-Dean of the University of Melbourne’s Faculty of Business and Economics. He takes over from Professor Zeger Degraeve, who will step down in February after six very successful years leading the School.

“He’s responsible for revamping and raising the quality of our MBA programs, introducing the successful Master of Business Analytics degree, integrating delivery of all executive education programs at our revitalised Carlton campus, establishing MBS offices in Kuala Lumpur and executing an important collaboration agreement with the University of Melbourne.”

Ian Harper at a glance: