"This award is welcome recognition not just that I matter, but far more importantly, that Aboriginal and Torres Strait Islander people and their knowledge really count." 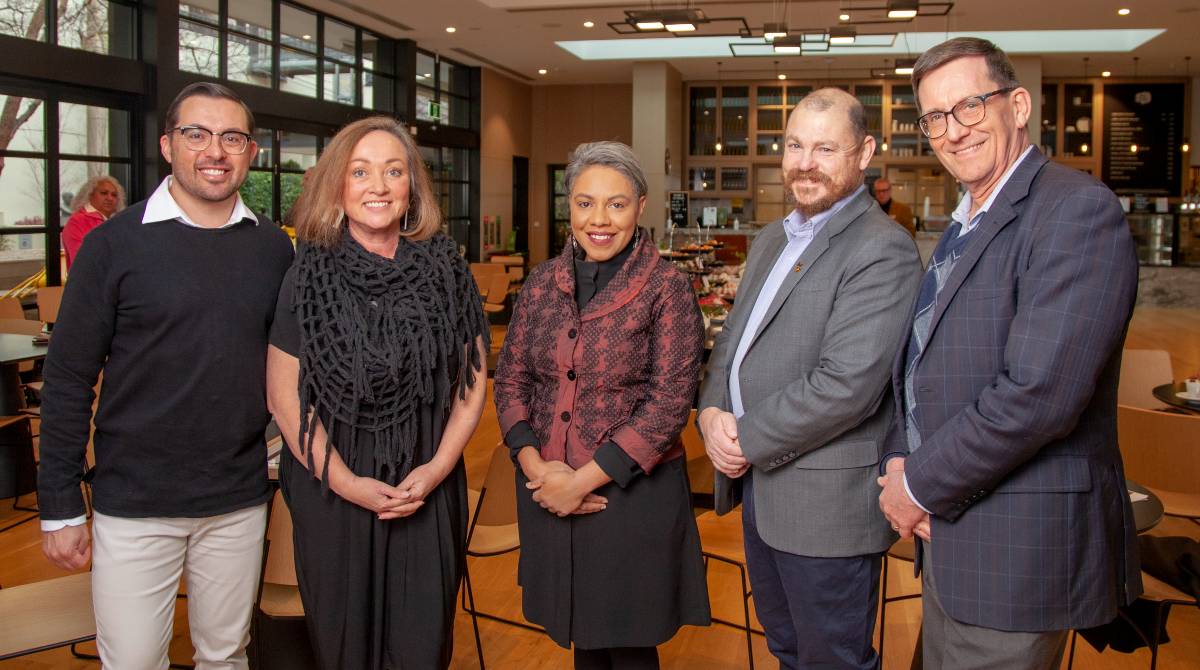 Duean White, Dr Maree Meredith and Kieran Hynes (pictured from centre left to centre right) received their scholarships in person at a presentation ceremony on Sunday, which also marked the start of NAIDOC Week 2022.

Held across Australia in the first week of July each year (Sunday to Sunday), NAIDOC Week celebrates and recognises the history, culture and achievements of Aboriginal and Torres Strait Islander peoples.

Designed to empower First Nations business leaders, the scholarships will cover full tuition for recipients to take part in any of Melbourne Business School's MBA programs.

"We initially proposed to award two of these scholarships this year, but the quality of applications we received convinced us to make it three."

In accepting the scholarship, Dr Meredith said it was "a reassurance that despite many hurdles already passed, and many that will undoubtedly still come, I can step forward onto the carpet shared not just by the wisdom and guidance of my Elders, but also by the allies and partners who are stepping forward right now to support Aboriginal and Torres Strait Islander leadership.

"This award is welcome recognition not just that I matter, but far more importantly, that Aboriginal and Torres Strait Islander people and their knowledge really count." 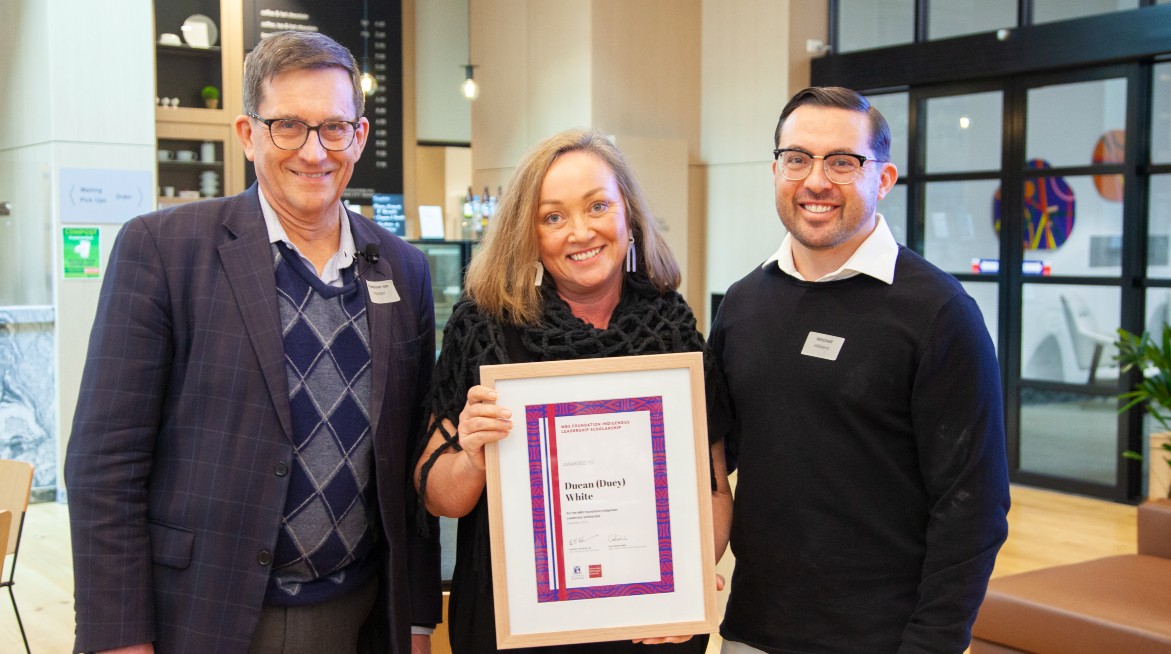 Duean White is a Biripi woman who is a workplace consultant, careers coach and mediator with diverse experience working with universities, government and businesses across Australia.

Ms White studied Year 12 in regional Queensland and scored in the top 1 per cent in the state, which opened up the chance to study just about anywhere in Australia. However, because she was the first in her family to go to university and it was an "unknown", she said she didn't fully end up making the most of the opportunity.

That experience has inspired Ms White to help young Aboriginal people identify their options and make decisions that are the best for them, ever since.

In her acceptance speech, Ms White said she hoped to use what she learned on the Senior Executive MBA program to empower others.

"I really look forward to being able to share all the things I am learning with people and boards and recommending it to lots of others," she said. 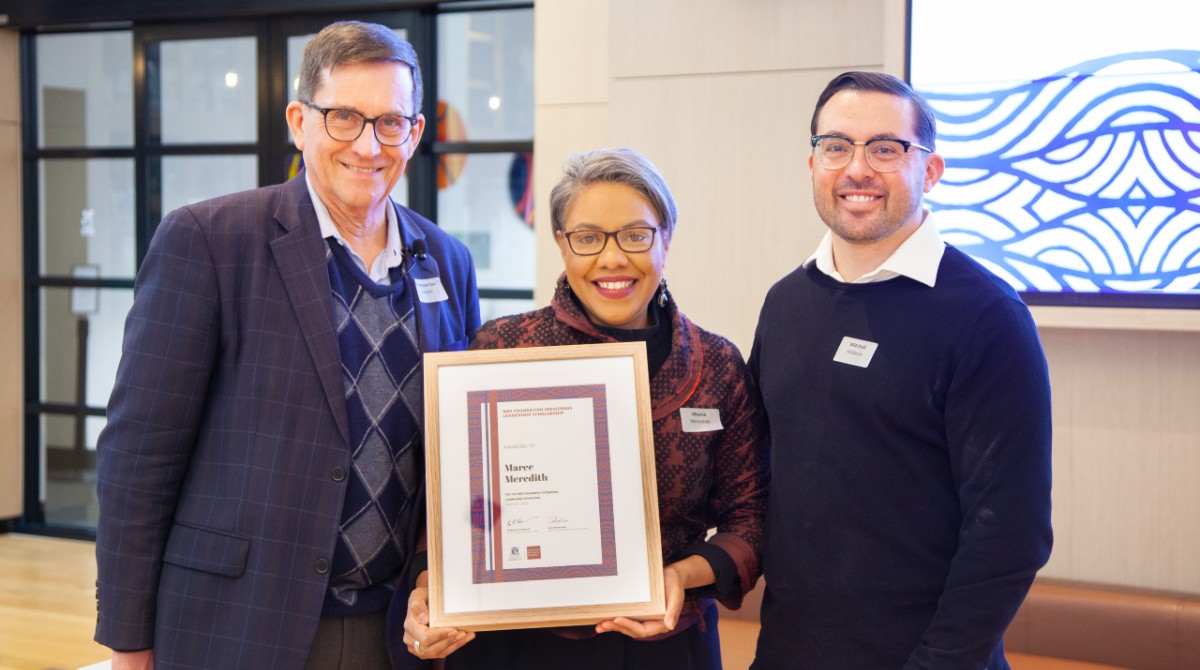 Dr Maree Meredith is a Bidjara woman who is originally from Brisbane but now lives in Darwin.

Dr Meredith has a PhD in Anthropology and is an Associate Professor at the College of Medicine and Public Health at Flinders University and the Director of the university's Poche SA+NT centre.

After Dr Meredith left high school in Brisbane, Rotary International offered her the opportunity to spend a year abroad in France as an exchange student, which inspired her to work in the tourism sector upon returning home.

Since then, she has held several important roles including Deputy Chair for the Aboriginal Tourism Committee, and Indigenous Tourism Development Officer for the Central Land Council in the Northern Territory.

As a researcher, Dr Meredith undertook her PhD on the health promotion benefits of art centres in the remote APY communities of north-west South Australia.

In her scholarship application, Dr Meredith said the challenges she faced along the way included "most of life's major turning points".

"Each challenge," she wrote, "represented an opportunity for growth. I have taken that idea as a personal philosophy throughout my career. It has sustained me physically, mentally and spiritually." 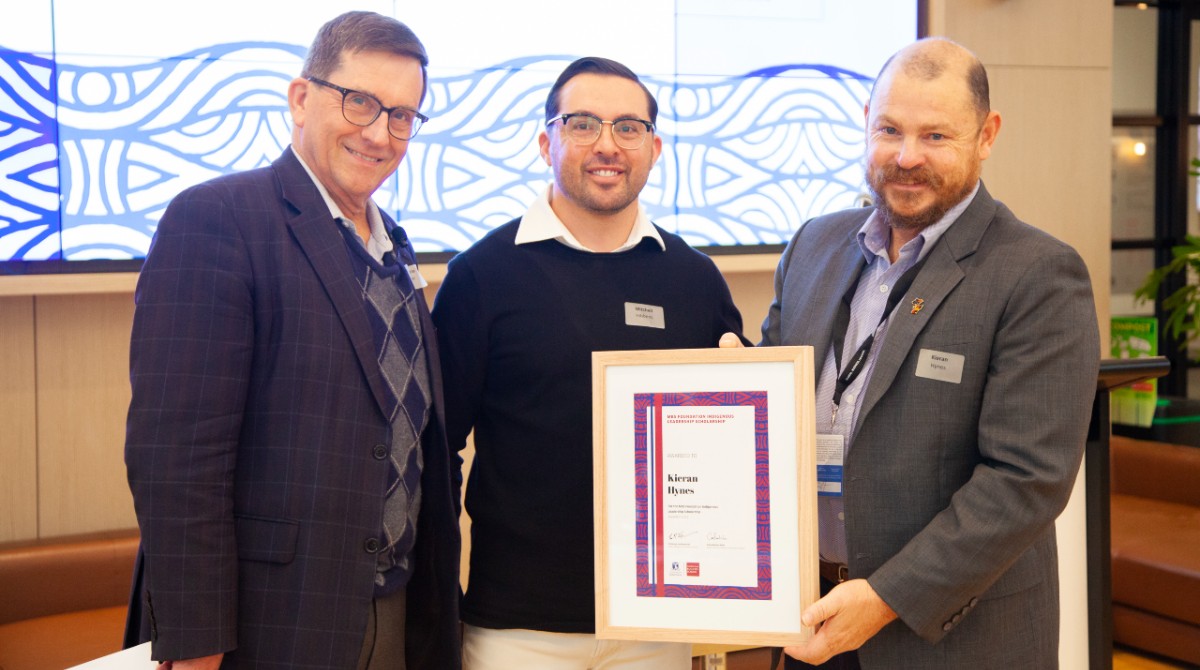 Kieran Hynes traces his heritage to the Worimi people of coastal New South Wales, near Port Stevens. He grew up on Wiljali country in Broken Hill and now lives on Ngunnawal country near Canberra.

Mr Hynes spent many years in the Australian Army, and after a knee accident forced him to rethink his future in more physically demanding roles, he became a signals specialist with responsibility for IT and cybersecurity.

With support from the Defence Department, Mr Hynes was eventually able to set up his own IT and cybersecurity company, Willyama Services, based in Canberra. Its vision is to be the leading majority-Indigenous-owned professional services firm in Australia – something Mr Hynes said he hoped to achieve with the help of the Senior Executive MBA program.

"The intent is to keep creating opportunities for Aboriginal people in sectors they normally wouldn't have exposure to," he said during his acceptance speech.

"If I'm trying to create a business that is as successful as it can be so I can employ Indigenous people, I need to have the skills to run it as best as I can."

For more information on the MBS Foundation Indigenous Leadership Scholarships and others, visit our Scholarships page.