The quality of teaching at Melbourne Business School owes much to the calibre of our supporters, as exemplified by the Hibberd Lectureship, named after one of Australia’s most significant nation builders and held in 2017 by gender-bias expert Professor Cordelia Fine.

Educated at Sydney’s famous Fort Street Boys’ High School, Sir Donald Hibberd joined the Australian Public Service at the outbreak of World War Two and went on to help establish the then government-owned Commonwealth Bank and turn Australia into the world’s largest bauxite before becoming a director of mining giant CRA (now Rio Tinto) and Reserve Bank Board member.

After his death in 1982, Sir Donald’s widow, Lady Florence Hibberd, set up the lectureship with support from the University of Melbourne and Comalco, a Rio Tinto subsidiary that Sir Donald headed soon after it was set up in 1956 to mine bauxite in Weipa, Queensland. 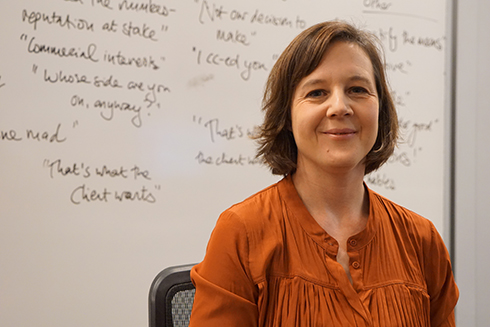 In 2017, the Hibberd Lectureship was awarded to Professor Fine, allowing her to continue a strong relationship she already had with the School and to teach Ethical Leadership, Ethics and Social Responsibility on our Executive and Senior Executive MBA programs.

Professor Fine is an acclaimed author and researcher in the field of gender bias, and bias in general. She taught on our MBA and executive education programs for several years before moving to the School of Historical and Philosophical Studies at the University of Melbourne.

“The Hibberd Lectureship allows me to work across several faculties and interact with a very broad community,” Professor Fine said. “My new colleagues are philosophers with plenty to say on the kinds of issues that get discussed in the business school classroom. That interaction opens the ivory tower to people who work in the outside world. I’m very grateful to be able to be a part of that.”

Professor Fine’s work challenges the comfortable view that we know why we moralise and behave the way we do.

“A lot of the psychological literature undermines that pleasing impression we have of ourselves, and it’s been a great concern of philosophy, this challenge to the idea of morality reliably arising out of a process of individual reasoning. We have to also understand how our personal biases and the situations around us can encourage us to rationalise unethical behaviours or behave in unethical ways.”

Professor Fine’s research has been published in Science, Ethical Theory and Moral Practice, the Journal of Business Ethics and other academic journals. Her books include Mind of Its Own, Delusions of Gender and Testosterone Rex.