What began as something to do during lockdown has earned four MBA students a global award and admiration from Australian bank NAB. 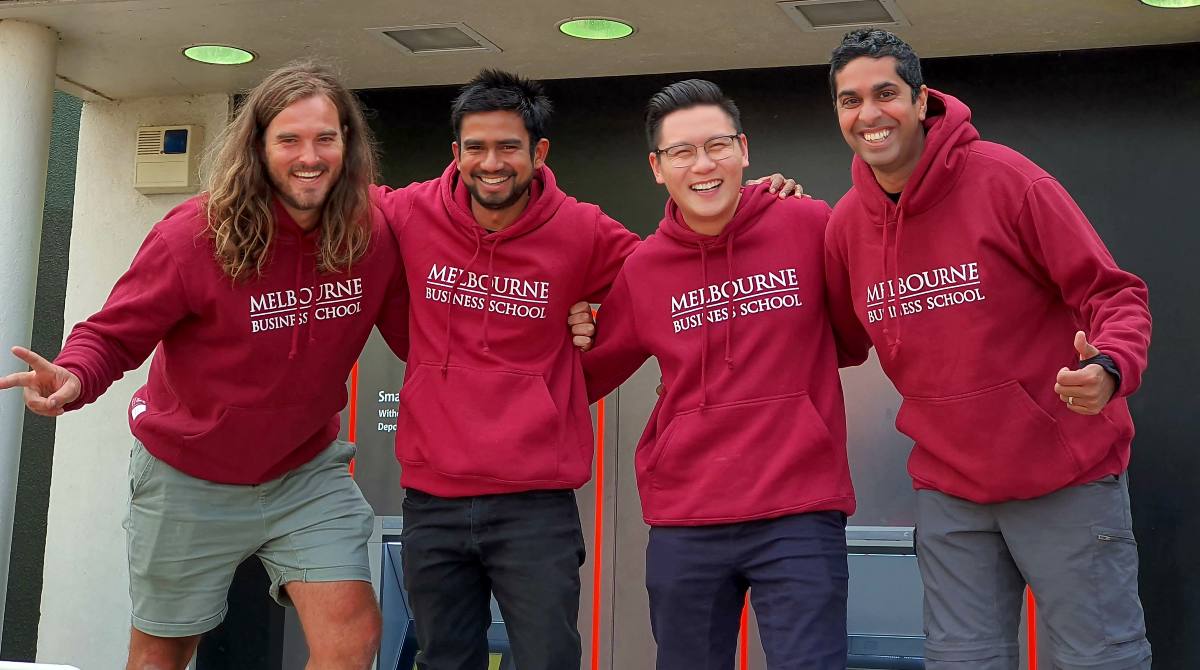 Calling themselves the Hoodies, the Part-time MBA students last month learned that they had won the international Zurich Enterprise Challenge with an idea that could change how financial companies assess risk.

Officially called Syndicate Six, the team dubbed themselves the Hoodies after deciding to wear their Melbourne Business School sweats at every stage of the competition – impressing the judges with their dress sense as much as their idea.

"When we did our first-round presentation, we tried to brand ourselves and used the Melbourne Business School logo as our backdrop and all wore our MBS hoodies," David Nayagam says.

"And in our first call with the Zurich team, we wore the hoodies again, and they loved it. It then became a trademark, and we wore them for our meetings with NAB and for our final presentation. It became part of our culture."

Syndicates Six's laid-back approach, fresh set of eyes and respect for culture allowed them to develop an idea that turns high-risk cases in the financial sector into opportunities, says team member Gideon Lui.

"Bringing a different perspective to the traditional financial and risk management environment helped us really zoom out and still dive deep into the problem that we finally identified."

Given their backgrounds, the team were hoping to work on an aviation industry problem. David almost became a European Space Agency astronaut several years ago, while Gideon is an industrial designer and teammates Dushan Wickramarathna, a mechanical engineer, and Chris Watkins, a computational physicist.

But after surviving the first round, instead of getting to work on a Space X problem, they were paired with NAB.

"We thought, 'What do any of us know about retail banking?'" David recalls. "But we were interested in quantifying risk, so, we tried to think about it in a different way by bringing in more dimensions than are currently used."

When risk is plotted on a typical two-dimensional graph, showing likelihood vs consequence, high-risk cases tend to cluster together.

Drawing on Chris's computational skills, the Hoodies showed visually how high-risk cases can move to positions of less risk and greater opportunity when other details about them are included in a multi-dimensional model.

"When Zurich gave us access to their risk analysis tools, which had some global data on it, that excited NAB enough to give us some of their data, and then things really accelerated when NAB saw what we could do with it," Chris says.

While the team created an impressive model, he says their real achievement was finding a way to explain the significance of their results in simple terms.

"That's what our CAT framework let us do. That's what won it for us, being able to turn a deep, technical piece into something that's strategically useful, insightful and immediately useable." 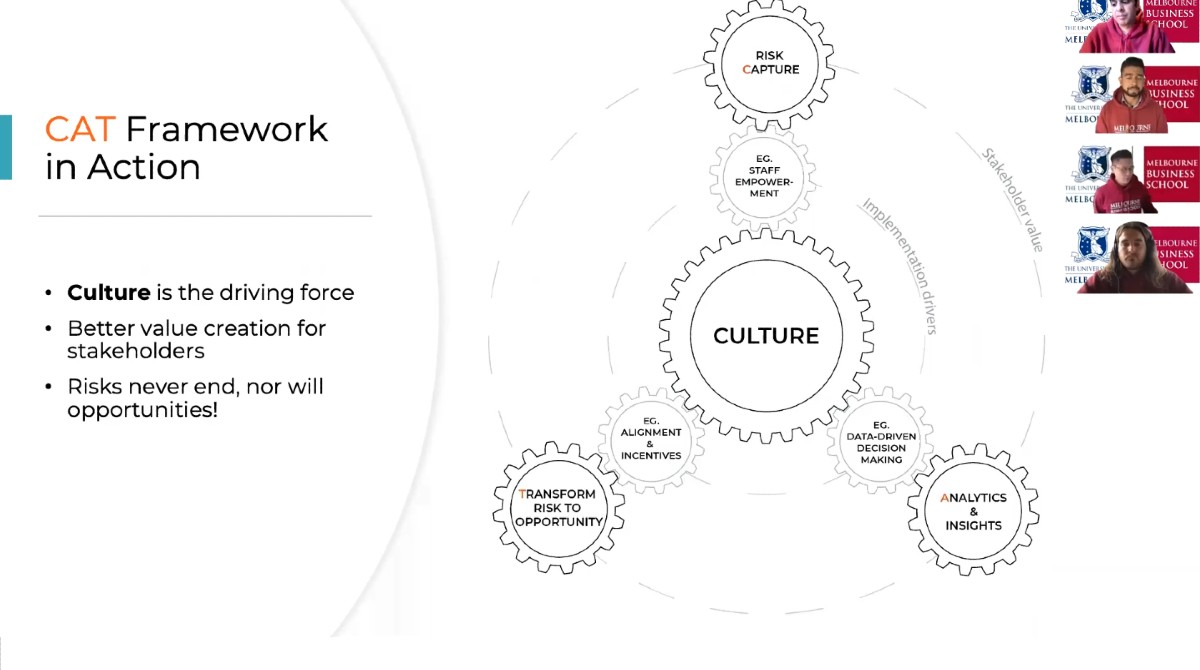 Their CAT framework shows how effective analysis depends on connecting three core data elements – capture, analyse and transform – to culture by incentivising and empowering people to collect and make use of broad data, including data that senior leaders might not like.

"We took a step back to ask what it all meant for NAB and started to draw on our MBS training, especially Managing People," Gideon says.

"I have to give a big shout out here to all our MBS professors who helped us see things differently and really drilled into us that it’s the talent and culture that drives organisational success."

Gideon credits mechanical engineer Dushan with creating a diagram that uses three cogs to connect all the moving parts of their multi-dimensional model and CAT framework to a big, central, culture cog.

"I wouldn't take individual credit for anything we've done," says Dushan, "but, in the early stages, Dave and Chris were heavily focused on the data side and Gideon and myself were looking at the non-data side.

"We spent time trying to create something that could be communicated easily. That’s when we came up with the three cogs and condensed everything that we'd worked on for three months into one diagram. Without it, we wouldn't have been able to communicate everything to NAB or Zurich."