Sherlock Holmes and the mystery of global deflation

Since the beginning of the Global Financial Crisis in 2008, governments have spent trillions to stimulate growth in their economies but to little effect, says Melbourne Business School Principal Fellow Dr Sam Wylie, the spectre of destructive deflation still haunts us.

Dr Wylie likens the situation to “the dog that didn’t bark”, a crucial clue in a Sherlock Holmes story that alerted the fictional sleuth to the absence of a murderer in a place he was supposed to be.

Despite massive government spending, cutting interest rates to near zero and creating huge amounts of new money through quantitative easing, the dog hasn’t barked in the global economy and growth remains stubbornly low. 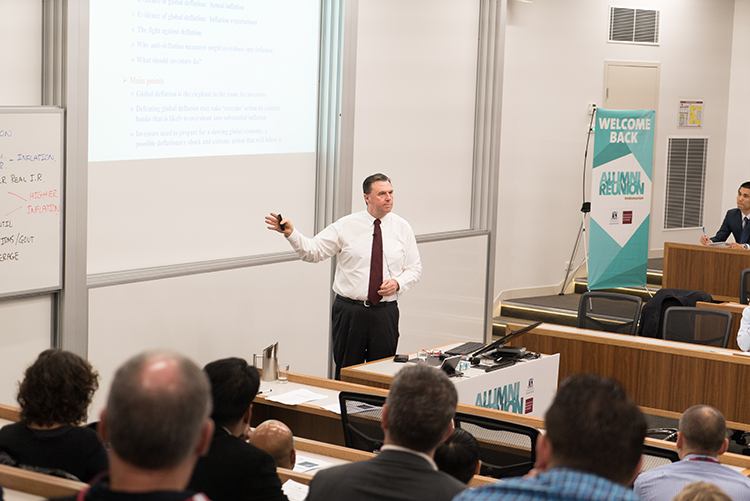 “The amount of new money that the US, Europe and UK have created is 20 per cent of their GDP, and in Japan, it’s 80 per cent. When quantitative easing eventually started in Europe, the central bank was creating 60 billion euros every month,” Dr Wylie said.

“But we’re still at very low levels of inflation. We’re treading water. We don’t know whether inflation will go up. Let’s hope it does because it’s the way out of the GFC, and it’s a pretty ugly prospect if it starts heading down.”

Speaking to a large Alumni Reunion audience at MBS recently, Dr Wylie said the global economy desperately needs inflation to avoid slipping into a downward spiral of low growth, falling prices and rising unemployment, which characterised the Great Depression in the 1930s.

“Deflation is a very horrible thing. Consumer confidence gets trashed, unemployment goes up, household spending and business investment goes down, as do prices and company revenues, so people get sacked and so on. That spiral took US unemployment to 26–28 per cent of the workforce in the Great Depression.”
He said job growth in the US, the world’s largest economy, is more important for the future health of the global economy than UK vote to leave the EU.

Dr Wylie said deflation is the “elephant in the room” for governments and central banks, who have an historic commitment to fighting inflation.

Despite fears that governments and central banks have already used up all their ammunition to fight deflation, Dr Wylie is confident we’ll see more stimulus efforts in the near future, posing considerable risks for investors.
“My prediction is that we’re going to have strong deflationary forces, which will be met with extreme action and lead to some overshoot. The GFC will end in a burst of global inflation, and investors need to get ready for that.”