You have to give it to our part-time students, who juggle high-powered jobs and study to get their MBAs. 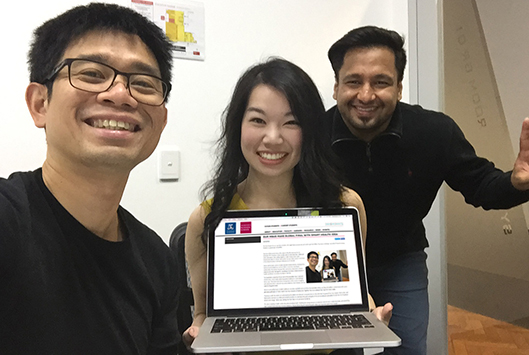 They love a challenge, especially if it leads to being finalists in a global case competition.

Part-time MBA student Adnan Ali is about to fly off to Germany for his employer, PPG Industrial, which supplies paints to Mercedes Benz, BMW and other automakers, after putting together a team whose smart health-improvement idea for remote communities has won them a place in the finals of the Global Business Challenge in Brisbane on 31 October.

Adnan and his team want to include wearable medical devices, developed by Sydney-based TeleMedCare and the CSIRO, in vans that visit distant communities. The devices measure ECG, spirometry, temperature, blood pressure and other vital signs for uploading to the cloud, where a doctor or health practitioner can review the data in real time.

“In Queensland, more than 55 per cent of the population live in rural and remote areas, which makes delivering quality healthcare a real challenge,” Adnan says. “And Queensland faces having three million people struggling with obesity by 2020 – and with that comes diabetes, heart disease and more costs for the government.”

Adnan’s multi-skilled team includes healthcare consultant and MBS alumna Fellicia Hambali (MBA 2016), and Alana Donaldson, a pharmacist with a post-graduate qualification in Public Health from the University of Melbourne. Together, they’ve considered their idea from every angle.

“Coming up with the model and understanding the patient and clinician’s viewpoint drew on the skills that I’ve gained from my program. We’ve also used frameworks, learned in our MBA and marketing studies, to understand the pains and gains of the service deliverer and patient to see how to bring about behavioural change,” Adnan says, adding that their idea is not just about the device.

“It’s about creating a health community and promoting health. Creating peer group pressure so everyone visits the van is really important, and something that I’ve learnt from studying consumer behaviour. People influencing and supporting each other is an important part of our project.”

Adnan says installing multiple devices in a van rather than providing them to everyone is a very cost-effective way to monitor health in remote communities. Team member Alana is trialling the idea at Maari Ma Health, which serves Aboriginal communities in far-western NSW.

“They were the first group to use a van to visit patients,’ Adnan says, “but weren’t using it to the full potential because it doesn’t carry sophisticated equipment or anything as compact and simple as this device.”

Adnan’s team have been helped by Kwanghui Lim, Associate Professor of Strategic Management at Melbourne Business School, who is now tuning their presentation skills in time for the Brisbane finals.
“They’re a really talented bunch,” Kwang says, “and I’m impressed by how much of what they’ve learned in class they’ve used to develop their idea.”

The team had three weeks to come up with their health improvement solution and get through the competition’s first round and two months to develop it ahead of the finals at the end of October.

“We’re up against another Australian team from QUT and two Canadian teams, and one of them won the competition two years ago,” Adnan says, “but I think we’ve got a good chance because we understand the landscape, people and culture of rural Australia.”

If you’re interested in studying your MBA part-time, visit the program page and register for the next information session.