The AGSM-Melbourne Business School Cup is staying put for another year. 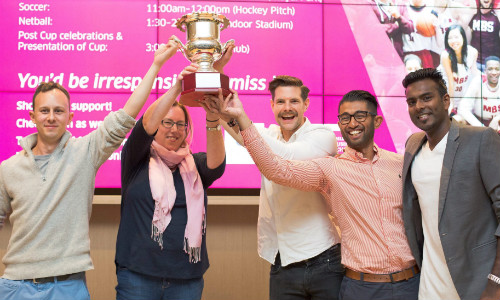 Melbourne won the 20th annual "MBA Cup" with a clean sweep of events in the competition that sees MBA students from Australia's top two business schools test their physical and intellectual mettle.

After performing well in the debate on Friday evening and convincing the judges that Australia should end its alliance with the US, Melbourne's success continued on Saturday with a 2–0 win in soccer, hard-fought 6–4 touch rugby victory and crushing 34–12 netball result.

“A clean sweep is certainly worth bragging about for a couple of years, and three years in a row is a pretty big deal,” says Melbourne Business Schoolstudent president Jude Newton.

It was the first time since 2012 that Melbourne has enjoyed a clean sweep, but Jude says he was most impressed by the sportsmanship that both sides displayed over the weekend.

“The highlight for me was the sportsmanship. In the past, some of these encounters have been pretty intense and not always friendly on both sides. But the AGSM student co-presidents and I met beforehand and agreed it had to be fun this year and conducted in the right spirit, and it was.”

Jude says he was particularly impressed by the chivalry seen in the touch rugby, when the AGSM team started chanting “MBS” after losing the game.

“There was a lot of passion and aggression by both sides on the field, as shown by the very close result, but when we heard them chanting and congratulating us on our win after the game, that was special.”

Jude's pick for most valuable player over the weekend was Melbourne Business School’s Chris Enright, who starred in the debating, touch rugby and soccer, where he saved a crucial goal.

“He was influential in every event he took part in and deserves a special mention,” says Jude, adding he’s proud of everyone who took part in this year’s event.

“The cup is something that's talked about when you start at Melbourne Business School, and a lot of AGSM students said it was a highlight of their MBA experience to come down here, meet some like-minded people, make new friends and see how things are done across the border.

“But I’m pretty sure they’ll want the cup back more than ever next year.”