MBS reigns in glory at the 2015 AGSM MBS Cup

A large group of 50 full and part-time Melbourne Business School (MBS) students travelled to Sydney for the weekend to represent the School and show off their skills at the 2015 AGSM MBS Cup, hosted by Australian Graduate School of Management (AGSM) at the University of New South Wales on 26–28 June.

Friday evening started off with a heated debate between MBS and AGSM. Along with our debaters, David Angdi, Candice Vallimont, Nic Rait and Rohit Lingineni, our Associate Dean, Laura Bell, represented and supported MBS as an adjudicator.

The topic, “Unpaid internships should be abolished”, was provided an hour before the debate, and our team used the time to prepare their arguments on the negative side. They argued that, while unpaid, internships are rewarding and benefit both business and the intern.

All of our debaters were outstanding and debated fiercely, however after a split decision, AGSM retained the debating trophy. Yet, as MBS students, we couldn’t have been more proud of our team and walked out with our heads held high.

Saturday morning saw the two schools competing in a variety on sporting events: tug-of-war, basketball, table tennis and soccer (futsal). MBS was dominant for most of the day. Our entire group of 50 students came to support our teams, with the MBS maroons outnumbering AGSM wombats.

MBS started off with whitewashing AGSM 4-0 in tug-of-war rounds. This success was followed by basketball, where the MBS team, led by Nic Rait and SRC VP Phil Neckers, again outperformed AGSM by a large margin.

The last sporting game for the day was two rounds of five-on-five futsal. Things really heated up here, with both schools playing their A games. Each round counted for 0.5 of a game. MBS won the first round, but our goal keeper, Franklin Onyekwum, was injured. The second round was even tighter and the winner was decided in a series of penalty shootouts, with AGSM winning in the last shootout.

MBS clearly dominated the 2015 Cup. All the activities were judged out of a total of five points. Debate counted for two, basketball and table tennis for one each, and the two rounds of futsal for 0.5 each. With 2.5 points to both schools, our convincing tug-of-war win gave us bragging rights.

As a group of students, we couldn’t have been more proud to be a part of the MBS family; and the weekend only reaffirmed our decision to have chosen MBS for our studies. As the President of the SRC, it was an honour and a matter of pride for me to have led this amazing group of people to Sydney. We not only competed and won but also kept our game “classy”, as per Laura Bell’s recommendation. All our players demonstrated sportsmanship and the School spirit at its best.

We would like to thank AGSM for their warm hospitality and look forward to hosting a bigger and better Cup in 2016. 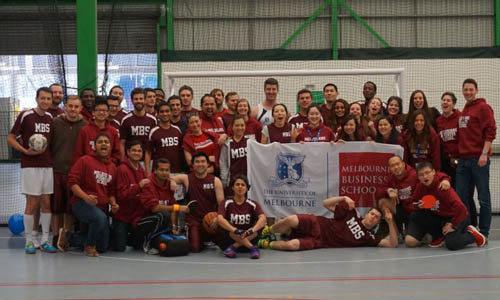 View the Facebook Gallery for a peak of the action at the AGSM MBS Cup.