Sir Richard Branson is one of the world’s most admired entrepreneurs, best known for founding Virgin Group. Few people ever get the chance to meet him, let alone pick his brain away from excitable crowds of people flocking for a selfie.

Alumna and MD of Apoumamé Consulting, Piper Gill (MBA 2004) got to meet him one-on-one, thanks to Melbourne Business School’s enduring connections with business leaders and partnership with the World Business Forum.

“World class experiences don’t stop as soon as you finish studying at Melbourne Business School and I was thrilled to have been given the opportunity to meet Sir Richard Branson and attend the world’s biggest business forum.”

“What I’ll remember the most is his affable persona.  He pleasantly indulged everyone who crossed his path with a selfie, handshake or warm smile. His love of people was very apparent."

In his interview with Alex Christou, Director of Corporate Relations and Partnerships at Melbourne Business School Branson shared his philosophy on leadership. 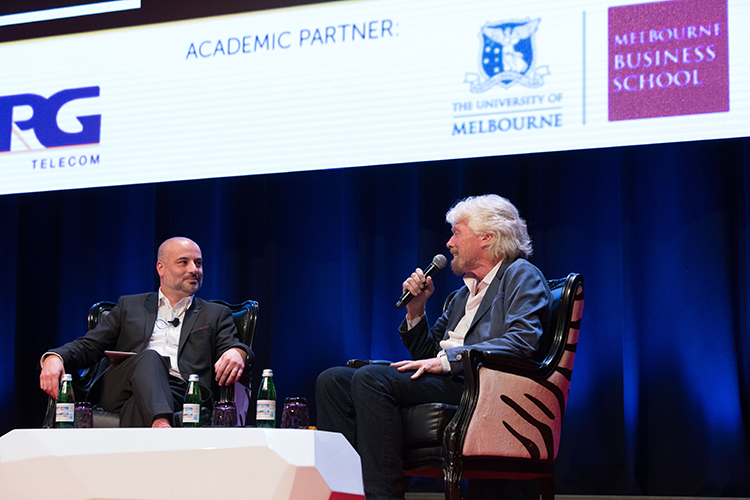 “Early in life I had to learn the art of delegation. If you don’t delegate, you’ll just end up being a manager, not a true entrepreneur,” says Branson.

“What you need to do is find people who love people, who look for the best in people, who are good at praising and motivating people and will work hard to make their particular company the happiest and the most productive as a result.”

These future leaders are often sitting right under peoples noses.

“Too often people get experts from outside but right in their own company there could be someone who if given the chance will really excel,” Brandon shares.

In reflecting on the success of the Virgin Group, from humble beginnings with one second hand Boeing airplane to its name to spacecraft, perhaps one of the most impressive risks Branson has taken has been his reinvention of annual leave.

Over the past three years Virgin Group has allowed employees to have as much time off as they want on a paid basis as long as they get their work done.

“We’re experimenting with treating everybody as you’d expect to be treated at your family home. People haven’t misused or abused it because they’ve felt they’ve been treated like adults. It seems to have worked really well. It won’t work in every company…but in offices, that’s something I think can be made to work.”