Team Quantium took home the $12,500 first prize at this year's Melbourne Business Analytics Datathon by coming up with a way to predict wickets in cricket matches. 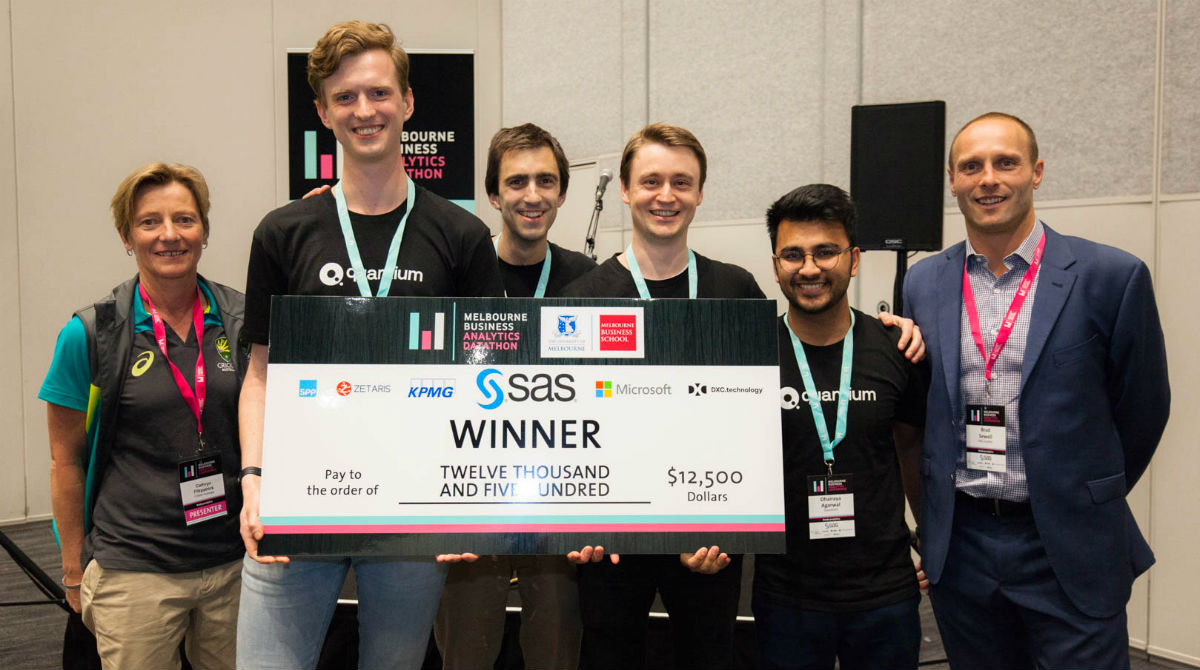 "I think we put together a clear story of why our idea to predict wickets was valuable and how it could be used in real life," said Liam.

The team's winning idea was titled the Return on Bowling Optimisation Tool – or ROBOT, for short.

By looking at historical match data, ROBOT's aim is to help captains choose the right bowler at the right time for the best chance to send off a particular batsman, as well as what sort of ball should be delivered.

The system was based on a variety of data including bowler proficiency by ball type, the line, length and speed of deliveries, batter history and run average, as well as the ground, gender and innings.

"I hope Cricket Australia can use our idea for making decisions in games, but I think what would be really cool is if it can be used to help cricketers train on the types of balls they're not as good at hitting," Liam said.

The $25,000 prize pool competition challenged corporate and student teams to come up with an effective, but easy to communicate and insightful solution to increasing fan engagement within a sport.

Runners-up Team Trust an Engineer from AMOG Consulting took second place with $5,000, while student team Full-time Master of Business Analytics from Melbourne Business School came third in the overall competition with $2,500, and first in the student category to take home a further $5,000.

"The reason we won the Datathon was primarily due to focus. We spent a lot of time finding one problem to solve and we just tried to solve it," said Thomas Duke from the student team.

Thomas and his teammates Yougun Han, Heidi He, Ben Ong, Cynthia Zhang and Bill Zhong came up with an AFL fixture planning tool to create on-field equity across all teams.

They used advanced Monte Carlo simulations to dynamically determine fixtures in the year, and were also awarded an additional $5,000 cash prize by Zetaris, the technology provider for the datathon, and an Azure computing credit worth $5,000 by Microsoft.

Competition judges were ICC Hall of Famer Cathryn Fitzpatrick and dual AFL Premiership player Brad Sewell of Hawthorn – pictured above with Team Quantium – as well as Dr Alice Sweeting of the Western Bulldogs, David Bowie of SAS, Amanda Good of KPMG and Professor Steve Stern of the Duckworth-Lewis-Stern method fame.

More than 1000 people attended the conference to hear from a range of academic and industry leaders including the Treasurer Hon Josh Frydenberg MP, Professor Harikesh Nair from Stanford University, Professor David Bell from Idea Farm Ventures and Anil Sabharwal from Google.