Growth mindset a must for resilience

For a long time conventional thinking has been that intelligence is a fixed human trait; that it can’t be changed or improved on. 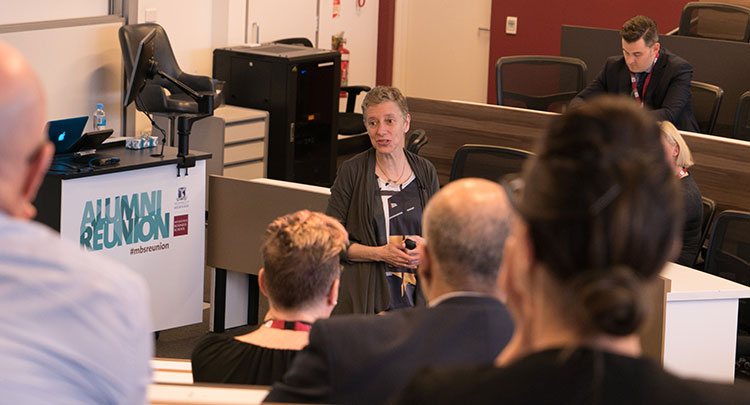 Jill Klein, Professor of Marketing at Melbourne Business School, says this is an example of what it known as a “fixed mindset”.

As it turns out a fixed mindset has a lot to do with whether a person is, or rather isn’t resilient.

Resilience, Professor Klein says is a trait common in people who possess a growth mindset, which means that you believe that your intelligence and abilities are not fixed but rather a growth area.

“Our brains are very plastic,” Professor Klein shared during her session at Alumni Reunion in June.

“It turns out that thinking intelligence is a fixed trait, as opposed to thinking it is malleable, has a huge part in resilience.”

Professor Klein explained that the so-called “self-esteem movement” has proved a failure when it came to building resilience in people.

“We have thought that the way we give kids self-esteem is to tell kids they are wonderful and special and so smart,” Professor Klein said.

“The self-esteem movement for kids has backfired. Turns out that’s brought us a lot of adolescent depression. They (over-praised children) become very brittle and avoid challenges.”

“This has been shown with managers. Ones with growth mindsets are significantly more likely to persevere.”
Dr Klein said children who were praised for their efforts performed better than those who were simply praised in terms of being “smart” or “fantastic”.

Professor Klein has had a unique perspective on resilience – her father, Gene, survived the Holocaust. At 17 he was sent to Auschwitz concentration camp, separated from his family. He was reunited with his mother and sisters when the Nazi camps were liberated by the allies.

For Gene it was resilience that enabled him to break down and deliver on his goal to survive and see his family again.

By surviving one day at a time and taking a calculated risk when asked by a guard if anyone in his group of prisoners could speak German, Gene was able to work with a German civilian engineer who showed him kindness and snuck him extra food, which aided his survival.

Gene’s story is an extreme and inspiring example which holds relevance in the workplace.

“Your resilient leadership can help make the team a lot more resilient. As a leader, people are going to be looking at you,” Professor Klein added.

The good news is there is always room and opportunities to achieve a growth mindset that will benefit all areas of life.

“Abilities are not fixed, we can change mindsets,” Dr Klein said.

Professor Klein wrote a book about her father’s experiences called We Got The Water: Tracing my Family’s Path Through Auschwitz.