Wesfarmers Managing Director Richard Goyder reflected on his career success and leadership challenges at our Dean’s Leaders Forum in May, demonstrating to the packed house of alumni, faculty, students and business partners that he has not lost sight of his humble beginnings as a “farm boy from WA”.

In an insightful address, Goyder, who leaves Wesfarmers in November after 24 years, spoke of the importance of communicating with staff, mutually supportive board and management relationships, succession planning and, of course, leadership.

While about to stand down from his leadership role at Wesfarmers, Goyder dismisses any notion of retirement. His plans to build his farm and take on a growing list of board positions at the likes of the AFL Commission, Qantas and Woodside Petroleum, suggest his impact on Australian business will continue.

“I don’t worry too much about legacy. I’ll walk to the next challenge. Rob [Scott] will change things, and he should change things,” Goyder told his admiring audience.

Goyder spoke about the insatiable appetite for growth in business and the challenge he faced in taking over from a highly regarded CEO.

“I was lucky. I always had a board that was patient. When I started at Wesfarmers, the board were all farmers, and now I think I’m the only farmer. There’s a culture of being patient.”

According to Goyder, there’s constancy in leading and being called upon to make decisions.
“Leadership is about actually leading. Sometimes you look around and no one’s there. You have to make a call. I’ve never complained because it’s a drug. I love it. Sometimes, it’s lonely, but that’s what you’re paid to do.

“I've got better at having difficult conversations, but I don't like it. As a peer, you don't see people's weaknesses as well as when you are CEO, and you compare them to others.”

Goyder can’t imagine being a CEO without the constant relationship with a board chair and “the understanding that they can fire you”.

“I've never been to a board meeting unprepared, and I'd never want to.”

Goyder stressed the importance of a CEO and board chair having a mutually supportive relationship.

“The relationship needs to be open, honest and respectful.”

In his time as CEO, Goyder has taken comfort from learning that a board’s role extends beyond governance.
“The board is not there solely to govern – they are also there to support management.” 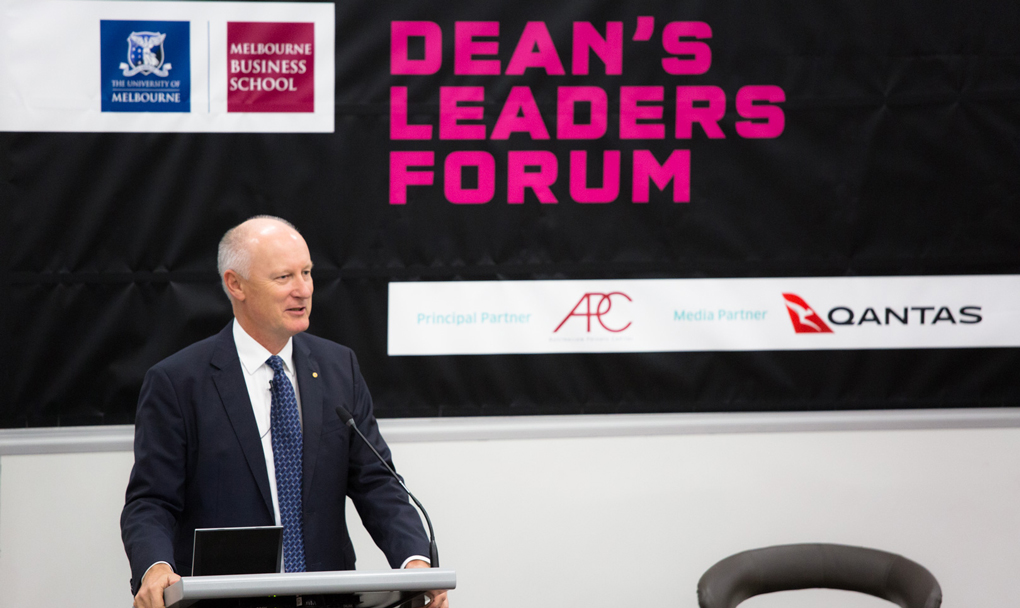 Goyder values having a mentor to guide him in his leadership roles, referring to his long-standing relationship with a mentor throughout his address.

“I was smart enough to bring on a mentor. He always said, ‘Be yourself, and the mike is always on, so be careful what you say.’”

Students and alumni were keen to question Goyder about Amazon’s imminent arrival in the Australian retail sector. Describing it as “a massive overreaction that will sort itself out”, his view that government regulations impact businesses ability to react to market pressure was reported in The Australian after the forum (‘Richard Goyder blasts ‘last century’ regulations as Amazon threat looms’).

“I think we are way more prepared then regulatory and policy makers. Competition is good … it’s great. Competition makes us sharpen up our act. Look at what Masters made us do at Bunnings. As long as we keep the customer at the centre of what we do, we'll be ok. We've got a pretty good head start.”

Knowing when to go and succession planning

The audience took the opportunity to ask Goyder how he knew it was time to step down from his role at Wesfarmers, and how he came to make the decision.

“In my time, I can honestly say I’ve woken up every day and looked forward to going to work. It’s been the most exciting and wonderful place to be and that would be the dream for my children. When you love a job and a company so much, it’s hard to know when to go.”

Goyder then described a beautiful, sunny weekend in Perth when, for the first time, he felt a small pang of resentment at having to go through a hefty stack of board papers.

“I didn’t ever want to be going through the motions with my job.”
“One of the constancies at Wesfarmers is change. In a well-run organisation, there should be better people coming through. No CEO does it his or her self. At Wesfarmers, we do succession planning pretty well.

When the audience asked about career mistakes, Goyder stated his biggest error was assuming everyone in the business knows what he knows and not communicating to staff when the organisation was seen as going through uncertainty.

“I’ve made plenty of mistakes. Sometimes you let emotion get in the way. I made some bad people decisions. I'm a no regrets person. You learn from your mistakes. I reckon I'm a much better CEO than I was 12 years ago. The board could have got nervous, and they stuck with me. You learn, you get a few scars, hopefully that brings wisdom.”