The seeds of an Australian native grain industry have been planted at Melbourne Business School after the first round of the global Hult Prize 2021. 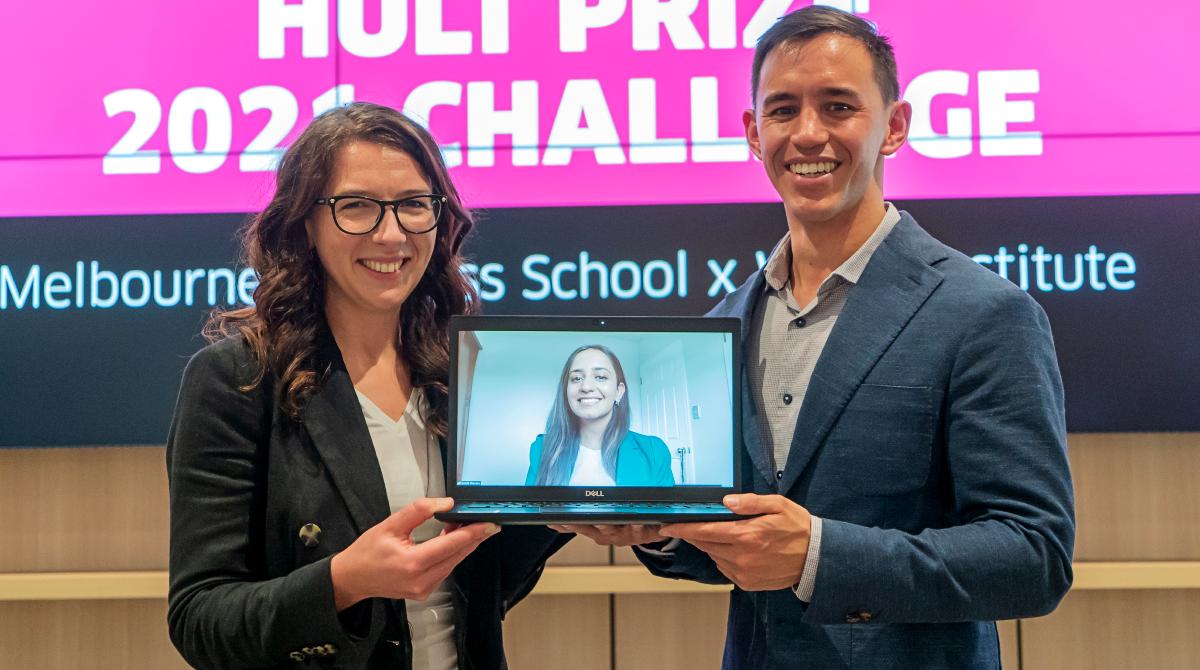 Brains for Grains beat nine other MBA student teams with an idea that the judges felt best addressed the competition’s Food for Good theme and purpose to create viable food enterprises that benefit at least 10 million people over the next decade.

After working together almost entirely online, the winners now advance to the next round of the competition in April, which Melbourne Business School and the Wade Institute of Entrepreneurship will again host.

There they'll take on MBA teams in the Regional Finals for the chance to win US$1 million in seed funding, a place in a start-up program in Boston and then a pitch opportunity at the United Nations in New York in September as one of the six finalists.

"We were absolutely thrilled to win this round," said Brains for Grains team member and Part-time MBA student Bianca Eden.

"The calibre of the presentations was very high. We were really impressed."

The event is organised by the Hult International Business School and the United Nations Foundation. Each year, MBA students at more than 2000 colleges and universities in 121 countries compete to find the best business solution to a major social problem.

The Brains for Grains idea promises to break down the barriers for Indigenous communities around Australia to thrive as farming hubs, while also addressing the threat from climate change to Australia’s largest agricultural export, wheat.

"It's at significant risk from climate change, which has to do with rising temperatures and poses a whole number of challenges from a food security perspective," said Bianca, whose team also includes Sukriti Khorana and Jason Whitehill.

Their idea to develop climate-resilient native grains into a major food source was inspired by Dark Emu, a book by Indigenous writer Bruce Pascoe, who argues that Indigenous Australians have one of the world's oldest farming traditions and aren't simply hunter gatherers, as they're usually cast.

"A lot of commercial, large-scale farming is quite destructive to the soil and land. What we're looking to do is to come up with an alternative that’s more regenerative and resistant to climate change," Bianca said.

"This alternative is a food story that's owned by the traditional owners of our land, who have thousands of years of history and culture and food practices, and we want the brightest minds across the universities to support that."

Technology is a significant obstacle to turning native grains into a major industry, Jason says, which is why Brains for Grains plans to spend much of the Hult Prize money, if they win it, on closing this market gap.

"The primary challenge is threshing, where the seed is removed. With a grain like native millet, the seed matures at varying rates, so you need a technology that harvests only the mature crop."

Brains for Grains has a good chance of getting beyond the regional finals, having already impressed a tough panel of first-round judges.

Through KPMG Australia and the Wade Institute's Venture Catalyst mentoring programs, some of the judges will now help Brains for Grain's prepare for the next round, where they will try to convince the next judging panel that they can create a whole industry, and not just a startup, out of native grains.

"It's a matter of articulating our value proposition and demonstrating the nutritional and environmental benefits of native grains," says Sukriti Khorana, the third member of Brains for Grains.

"That's going to be the key to getting our idea off the ground. In the long term, we need to partner with all the key stakeholders in the value chain, such as the farmers and producers in the community to ensure this is a collaborative process."

Sukriti was speaking from New Zealand, where she's been since the COVID-19 lockdown in Victoria in mid-2020, while studying a Part-time MBA at Melbourne Business School.

For Jason, who, like Bianca, started his MBA after last year's local lockdown, the competition has made the challenges of studying online worthwhile.

"It's what you're looking for in an MBA – something that is beyond what you might have guessed before you enrolled. This win wouldn't have happened unless the three of us had come together and morphed our original idea to make bread from native grains into something fuller and more worthwhile."