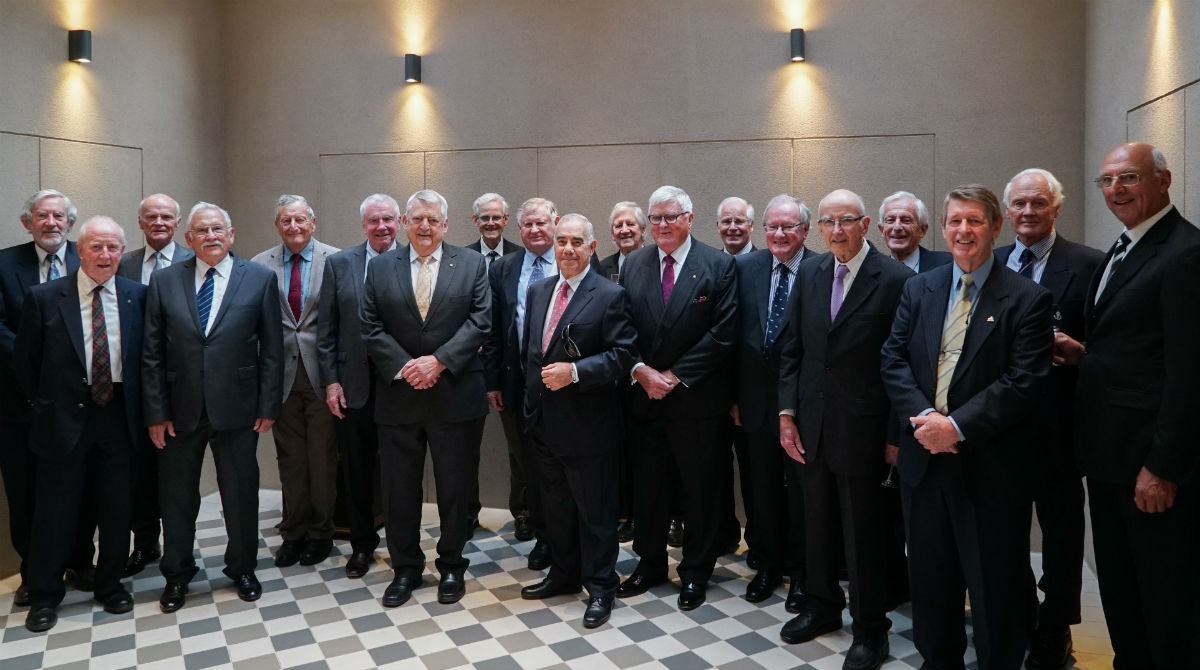 The MBA Class of 1969 reunited at the Athenaeum Club in April to reminisce on their careers and community impact at a lunch attended by Melbourne Business School Dean Ian Harper.

"The whole class was there apart from those overseas and who had passed on, including Peter Smedley just days beforehand," Professor Harper said.

Mr Smedley died from cancer aged 76. He had contributed immensely to the national business community as the chairman of OneSteel, Spotless and managing director of Colonial Mutual, which Commonwealth Bank paid $8.2 billion for in March 2000.

"At one point, Peter was a board member of the School and very encouraging of me when I was teaching here. He wrote to the group and said that he didn't think he was going to make the reunion because he was very ill," Professor Harper said.

"But because he was very matter of fact, you got the impression that he achieved a lot, he lived a full life – and now it was coming to an end."

What became apparent at the event was that Mr Smedley was just one member of a class full of high-achievers who had a profound impact on the Australian business landscape.

Geoff Allen, who chaired the reunion, was a senior advisor to politician Billy Sneddon during his roles first as Minister for Labour and then Treasurer, as well as the architect and co-founder of the Business Council of Australia.

Michael Bragg was an influential executive search consultant who successfully found and placed over 300 executives in private and government organisations – including Mr Smedley to Colonial Mutual in 1993.

They studied alongside Kingsley Culley, former CEO of the Melbourne Metropolitan Board of Works, and Denis Hogg, who expanded Epworth Healthcare into the largest private hospital in Victoria during his 21 years as chief executive.

As well as a successful career in manufacturing, John Maltzahn and his wife Kath created a not-for-profit company called Everest Trekking that over the years contributed more than $100,000 to the education of Nepali children.

Classmate Robert Logie-Smith spent 30 years as an international management consultant and was chair of the Melba Conservatorium of Music before becoming founding chair of the Melba Opera Trust, which provides scholarships and mentoring programs for young opera singers.

Don Begbie helped expand aluminium production for Comalco in the early 1980s before becoming a stockbroker and then an importer of fine French wines, while John Chambers – a former director of the Australian Meat and Livestock Corporation – continues to run his family's Glen Brodie Pastoral Company in Gippsland.

Thanks to his studies, John Dahlsen became one of the first commercial lawyers to have dual MBA and practising commercial legal skills, which saw him become a sought-after expert in mergers and acquisitions. That experience then led to becoming a director at organisations such as Myer, ANZ and The Smith Family, and eventually chairman of The Herald and Weekly Times, Southern Cross Broadcasting and Woolworths.

While sharing their stories at the event, many of the former classmates recognised the role that studying at Melbourne Business School had played in their lives.

"The MBA was an important step in their journey that introduced them to different people, different skills and set their career trajectories, by their own admission, in directions they wouldn't otherwise have chosen," Professor Harper said.

Professor Harper said listening to each of the stories was a profoundly moving experience, and he fielded many questions from the class about the future of the School.

"These are people who have notched up many successes and failures, but throughout the journey have grown immensely and look back on that now with a great sense of satisfaction and gratitude for the opportunities they were afforded," he said.

"I think that what they're really hoping for is that the MBA classes of today – which of course are much more multicultural and include women as well as men – will look back as fondly on their experience at the School in 50 years' time as they were able to."