A student-made device to speed up recovery from surgery was recognised for its commercial potential at the recent Endeavour Awards. 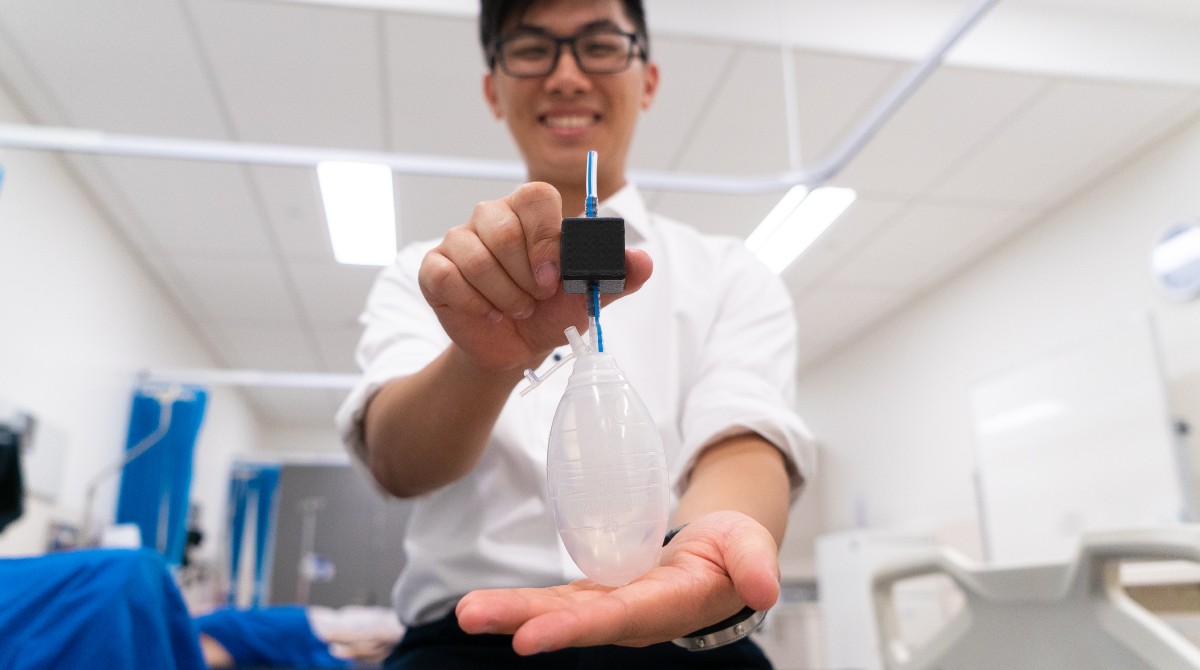 The medical device was created by Team Yabi from the BioDesign Innovation subject, which matches MBA candidates with engineering students from the University of Melbourne to find inventive solutions to healthcare challenges.

As well as winning the commercial award, Team Yabi were honoured for involving clinicians in developing their new flow monitor for surgical drains.

"The two awards validated that we're on the right track," says Dylan Andrews, one of the team's Part-time MBA students.

"One award was for commercialisation, getting our product to market, selling it and having a customer base and sustainable business model. The other was for collaboration, interacting as a team with stakeholders and customers, which got us to where we are."

Lesley Lam, fellow MBA student and general practitioner, says the team spoke with about 50 clinicians and hospital procurement advisors to create a device that could make a significant difference to surgical outcomes and hospital budgets.

"I was a surgical trainee before becoming a GP, and we used a lot of my contacts for our interviews," she says.

"In between COVID lockdowns, we had a face-to-face with the ear-nose-throat cohort at Austin Hospital and our primary collaborator Russell Hodgson at Northern Hospital, but most interviews and meetings were via Zoom." 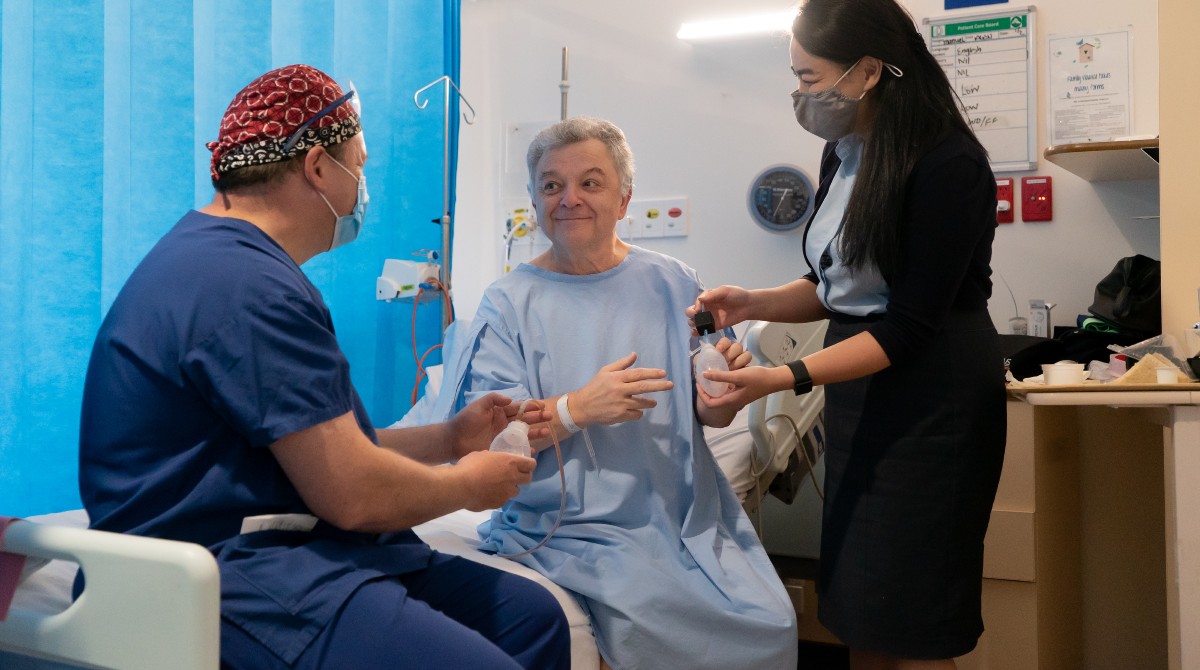 Most types of surgeries use surgical drains to remove unwanted fluid from affected tissue to prevent infection and support healing. Surgeons need to know how much fluid has flowed and when the amount was checked in deciding to remove the drain.

"If the drain comes out too early, it can reaccumulate before the patient can deal with the infection, which could mean a readmission. If it comes out too late, it can cause ascending infections," she says.

"Because hospitals get paid for a set time for each activity, getting a patient out in three days instead of the set four means getting paid the same amount for an economic gain."

Team Yabi's monitor records the time and rate of fluid flow from surgical drains with such accuracy that it could prove lifesaving for many surgery patients.

"After about five-to-10 per cent of pancreas surgeries, you can have what’s called a pseudo aneurysm, which occurs where a cut and blood vessel meet and is a natural healing process. But if the aneurysm bursts, it can be fatal. By picking up the initial bleeding before it becomes a massive haemorrhage, you can save the patient's life," Lesley says.

The engineering minds behind the device are University of Melbourne biomedical engineering students, James Lo and Joshua Huang, who worked together to create a prototype with the help of James’s 3D printer.

"I bought the printer way before COVID on special from Aldi. It's sort of my hobby, and I'm pretty happy that I was able to incorporate it into this project and show off my expertise," James says.

While James put his 3D printer to good use, Joshua had returned home to New Zealand, from where he remotely accessed James’s computer to record the results of the experiments they made together.

"We lacked a lot of the equipment that we normally could access, to the point where we had to do a lot of things in a make-shift way. When we needed a magnet of a particular shape, we bent a paperclip because we knew it would work," Joshua says. 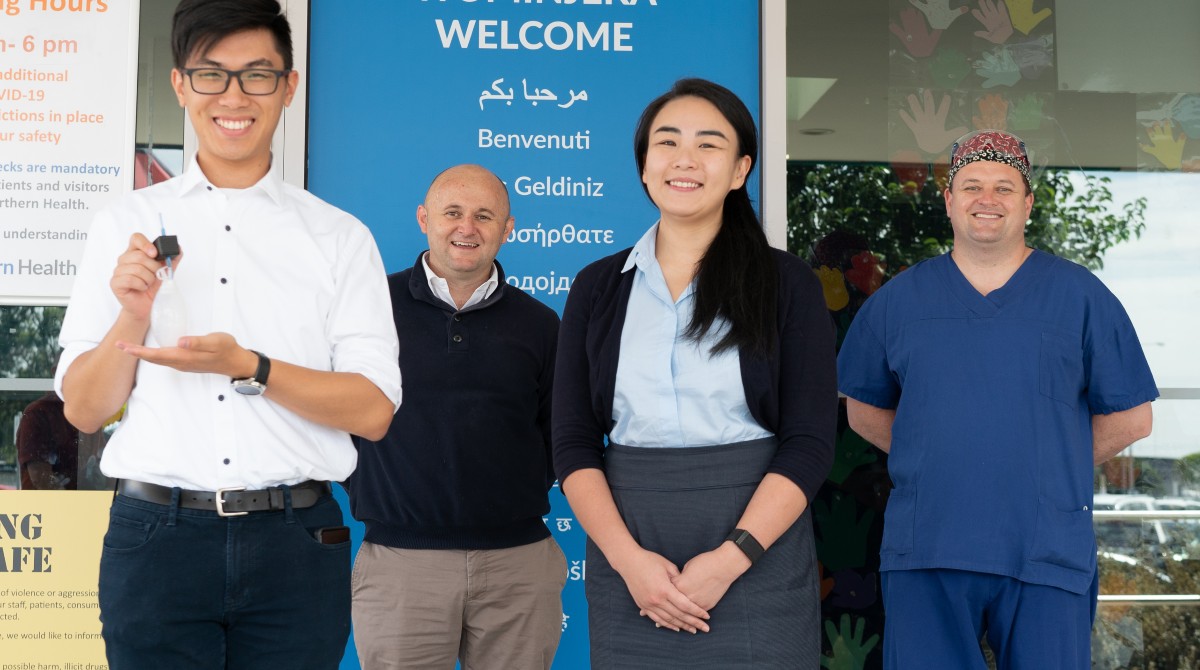 The team are now preparing their device for clinical trials, first with veterinary hospital animals and then with patients at local hospitals. They plan to enter more medtech competitions and bring the device to market over the next three years.

An idea that began in the classroom has already allowed Lesley to fulfill her dream of founding a medtech startup, helped Joshua win a summer job at medtech giant Cochlear, given James the prospect of a full-time job at Yabi and opened up a new career for Dylan.

"I started at Qantas in the graduate program, becoming an analyst and then a manager," Dylan says.

"Now, I'm working on Yabi, also developing my own startup and doing a medtech internship to help other people bring new products to market.

“To come from a non-medtech background, with little medical knowledge, to a career in the medtech sector, it’s just been great."