Agents of change must do more than set gender quotas

Driving change in the workplace when it comes to gender equality needs to be about more than just quotas.

That was one of the messages from the Melbourne Business School’s student-led Women and Management club event “Agents of Change” on March 2.

Organised by WAM members and MBA candidates Ciara O’Sullivan, Vanessa Whatmough and Kate Kennard, guests discussed examples of how Australian organisations are tackling – and implementing – change when it comes to issues like gender equity.

The MBS WAM club’s focus is to provide networking opportunities for MBS women and involve men in activities to raise awareness of the challenges faced by women in the workplace.

Ciara O’Sullivan said one of the most interesting messages conveyed on the night was the concept of “targets with teeth”, which meant organisations had to do more than just set gender quotas.

“These quotas are treated like KPI's and linked to leader's bonus payments,” Ciara said.

“I was also fascinated by the concept of driving change by understanding the 'stories' within organisations and investigating exactly what it is that holds people and organisations back from successful change.” 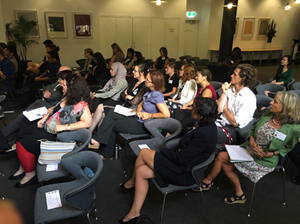 Vanessa Whatmough said the speakers each brought a unique but complementary perspective on how to introduce cultural change into organisations.

One of the initiatives discussed on the night was Male Champions of Change strategy that encourages men of power and influence to group together and work towards change on gender equality issues.

“We learnt that achieving greater gender diversity in the workplace is a challenge that male leaders can, and should, play a significant role in,” Vanessa said.

“Through events such as WAM’s “Agents of Change”, we can see how these frameworks are practically implemented, and what other techniques our panellists have learned or developed on the job,” she said.

Ciara said another highlight from the event was discussion on the importance of leaders being openly engaged in flexible work programs and encouraging staff – both women and men – to do the same.

Vanessa said it was clear from the speakers that the Male Champions of Change strategy was making “real headway” in some of Australia’s top firms like ANZ and McKinsey & Company.

“What was also made clear was the focus for any change project should not be ‘How can we solve this problem?’, but ‘What would we like our organisation to look like in the future?’,” Vanessa said.

“Anthea, Elly and Colin really inspired us to remember that employees are people – people who, on a basic level, merely want to be valued.” 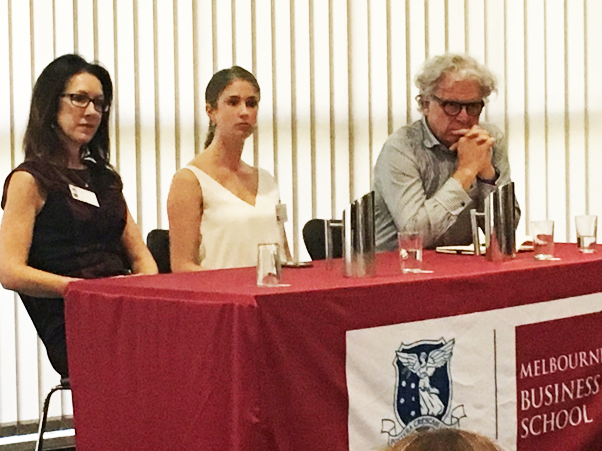 Save the date for the 2016 Women and Management Dinner

Join Deloitte Australia CEO Cindy Hook, Victorian Equal Opportunity and Human Rights Commissioner Kate Jenkins and Melbourne Business School Professor Isabel Metz for an insightful conversation on how CEOs can champion diversity and the impact this has on the workplace.