David Orford has enlisted Melbourne Business School to revolutionise the way Australians think about superannuation – but his plan might not impress their children. 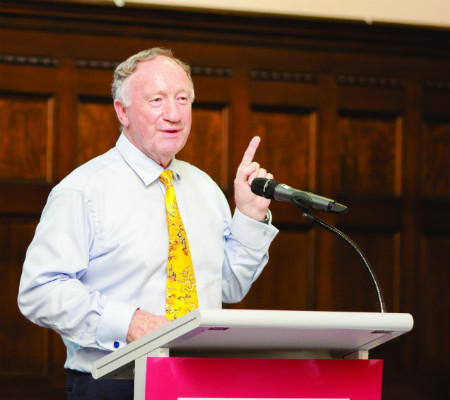 One of the challenges facing Australia as a nation is how to provide a high quality of living for retirees, as more people live for longer than ever before.

Up to half of all Australian retirees expect to outlive their savings, which means they could end their lives facing financial hardship – putting an enormous burden on the government and families, particularly women who are more likely to outlive their partners.

David, a long-time actuary, says the most sensible solution is for people to combine their super into a collective lifetime pension fund, which would give them up to 30 per cent more income during retirement.

The catch is that none of those super funds would be inherited by their children when they die.

Such a change would be hard to sell, which is why David pledged $900,000 to Melbourne Business School to fund research into how to change people's attitudes towards financial security in retirement.

The Orford Research Initiative will investigate different approaches to financial security for retirees, as well as how to educate them about various options such as pension funds and annuities – with the overall goal of improving their quality of life.

For David, it's about bringing fresh perspective to commonly-held assumptions about super and retirement that may not actually be in our best interest.

"Why should children inherit their parents' super?" he asks. "That's not what the system was set up for. I think the biggest challenge is marketing and psychology, and that's where Melbourne Business School comes in because it has real strength in those areas."

The type of lifetime pensions proposed by David would pay a regular income through your retirement, regardless of how long you live. If you die early, the pension could carry over to your spouse but not necessarily your children.

That system, made possible because of changes to superannuation laws in 2017, contrasts with current account-based super pensions that typically pay a conservative level of income because retirees try to stretch their super savings to last longer.

“People could take out more with the current products, but settle for the minimum because they don't know when they’re going to die,” David says. “But the reality is account-based pensions decline markedly if you live longer and can leave you with very little to survive on.”

The Melbourne Business School alum (MBA 1976) says a lifetime pension could help many retirees avoid poverty in their later years.

“When my father was in hospital before he died, I would visit him and see people wearing old clothes and not looking after themselves. I thought, 'This isn't the future that any of us want.'”

David made the donation to the School after selling his highly successful superannuation software company Financial Synergy in 2016 and deciding to give back to the community.

"After selling Financial Synergy, I was interviewed by the Australian Financial Review and they asked what I was going to do with the money," he said.

"I told them that I wanted to give back to the three institutions that have most helped me get to where I have – Trinity Grammar, the Institute of Actuaries and Melbourne Business School."

David believes the Orford Research Initiative's work will show the benefit of lifetime pensions to all Australians, not just retirees.

“It will have a huge impact on the federal budget if we can do it. If we can provide 30 per cent more income in retirement, it will mean a more than 30-per-cent saving in the government’s age pensions, and that could mean everyone pays less tax.”

Because older Australians spend more on healthcare, the increased retirement income would also allow them to pay higher health insurance premiums and keep that industry viable.

“The existing system of health insurance can't survive. It's unsustainable. Already the premiums are increasing at rates greater than inflation because, as a country, we're ageing, so the cost of health care just goes up and up. This lifetime pension option means we have more income to pay higher health insurance premiums in retirement and contribute more to our own health costs.”

David says about 80 per cent of super savings currently ends up in account-based pensions in retirement, but only 1 per cent of retirees have ever chosen a lifetime pension, a figure he hopes MBS research could help make 100 per cent in the future.

“If you ask someone of my generation, the baby boomers, they would say, 'Don't buy a lifetime pension,’ or annuity as they were called in the past, ‘they're not good value.’ But things have changed, the law has changed, and they can now be provided properly.”