Life on the double for Nicole Cook

Nicole Cook thrives on doing two things at once. As an undergraduate in Washington DC, she didn’t just study business, she studied part of her course in French.

And just before winning the 2016 Dean’s Scholarship for Women and Management and a place on our Senior Executive MBA program, she became Managing Director of innovative recruitment firm PeopleScout HRX.

Nicole, a working mum to three children, says the scholarship and support from both her company and her partner gave her the confidence to take on the challenge to study at MBS and lead the company she has been with since its launch in Sydney 10 years ago. 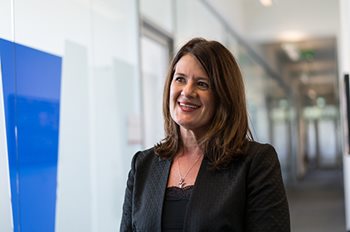 “Someone asked me if I would defer, and I said, ‘Absolutely not. I’ve been awarded a scholarship and there’s no way I was going to give it up,’” Nicole recalls. ‘Alright, do both,’ they said.’ That’s what the President of my company said, ‘Do both.’”

Nicole believes women who curtail their careers to have a family need support to fulfil their potential when they’re ready to resume.

“There’s an inherent conflict for women around committing to your job and your family. It’s not that men don’t have this conflict, it’s that women are expected to make the choice. It’s really important that women are encouraged to know they can do both and resume a career if they choose to not work for a period of time.”

In 2006, Nicole and her family moved to Sydney, where she became Head of Client Services for the technology business at HRX, a local start-up in the emerging recruitment process outsourcing (RPO) business that owns the Springboard recruitment technology platform.

The success of HRX in managing the hiring process for companies such as Lend Lease and LexisNexis attracted the attention of the leading US RPO firm PeopleScout, which bought HRX in 2014. Six months later, PeopleScout was taken over by TrueBlue, another major US talent acquisition player. They made PeopleScout HRX its Asia–Pacific headquarters and tapped Nicole to be the region’s Managing Director.

But Nicole declined the role when first offered it in 2015, feeling that the timing wasn’t right. She also wanted to study her MBA, having filled out her SEMBA application a year earlier without submitting it. Then her mother died.

“When Mum passed away last year, I started to reflect and think, ‘What if my life passed, and I never achieved the things I had hoped for?’ I knew it was time to do things differently, which included my MBA.”

Nicole finally submitted her application last year, just when her company’s US leaders came to Sydney and resumed discussions about her filling the Managing Director role. Then she heard about her scholarship win and knew she couldn’t say no to her MBA.

“My SEMBA study is strongly related to the challenges I now face at work. The timing couldn’t be better. The first thing for me is to get the confidence to know that I can succeed in my new role – and leadership building was the first thing we did in the course. It’s all aligning beautifully.”